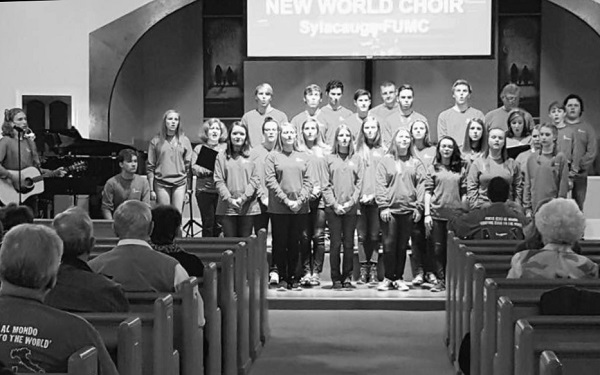 David Simpkins, the Music Director at FUMC, is also the leader for the New World Choir. “The idea is that young people will learn to sing and use their voice to witness for God,” said Simpkins.

The New World Choir has an interesting history for the Simpkins family. Simpkins’ father, Buddy Simpkins, was the Director at FUMC at the time, and changed the youth choir to be the New World Choir in 1967. He and the associate pastor at the time took the group to Texas, and it has gone on tour every year since then.

It was inspired by a group at the time called Up With People, who was touring at the time. There was a youth choir at FUMC when they saw Up With People perform in Talladega in 1967. The choir came back and said it could do something similar, as far as touring, and wanted the choir to go in that direction.

The group has changed over the years, varying in people and styles of music,  but it still tours and brings Christ to people through music.

The choir just started practicing last week. It will participate in Christmas, lead worship in some of FUMC’s services, and will be going to east Georgia this spring. The trip will be March 24 – 28. “The trip is always fun, but it’s also a meaningful and spiritual experience, as well.” Fundraising efforts will begin soon.

The New World Choir had a 50th Reunion two years ago. More than 80 people came back to sing at one of FUMC’s worship services. “The young people today probably can’t even imagine what the group has meant to so many people over the years,” said Simpkins. “For so long, that’s just what you did on spring break was go with FUMC’s choir on Sing Out, the choir tour program.”

All students in grades 7 – 12 are invited to join the New World Choir, even if they do not attend FUMC. “A lot of kids in our area may be part of another church that does not have a choir program, but they like to sing, so everyone is invited to be a part of it.” No audition is required to join the New World Choir. Simpkins said singing is just the medium to bring the kids together, and the real point of the choir is to build relationships and friendships based on Christ.

The New World Choir practices on Sundays at 5:00 p.m. for 45 minutes each week. Practices will continue through the end of the school year. If you are interested in joining the choir, you can contact FUMC (256) 249-0362 and ask for David Simpkins or email him.