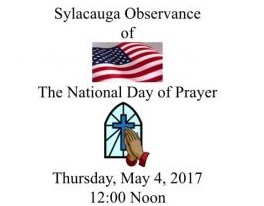 SYLACAUGA, Ala. – A National Day of Prayer has been recognized in the United States constitution for more than 70 years. The day, however, has been called on by lawmakers since the 1770s.

If you are looking to join in prayer with many throughout the community, you will have that opportunity in the city of Sylacauga.

The National Day of Prayer is set to be recognized on May 4 at noon in the Sylacauga City Council Chambers at City Hall. It was originally scheduled to be outdoors but was moved inside due to the threat of inclement weather.

To Bryan Taunton, Promotional Director of The Coosa Valley Ministerial Association, this is one of the most important days of the year. “Prayer is the best tool God has given us,” he said. “People are hurting, people are in need and most of the needs can be solved with prayer.”

Taunton listed crime, schools, first responders, city officials and our daily walks as aspects of life which prayer should be prayed over. “It’s cheap and it works,” Taunton said jokingly. “I encourage everyone to come and take part in this powerful day to pray over our city.”

The day was first established by congress in 1952 as an annual event by a joint resolution and signed into law by president Harry S. Truman. The law was amended under the Reagan administration in the 1980s, designating the National Day of Prayer for the first Thursday in the month of May.