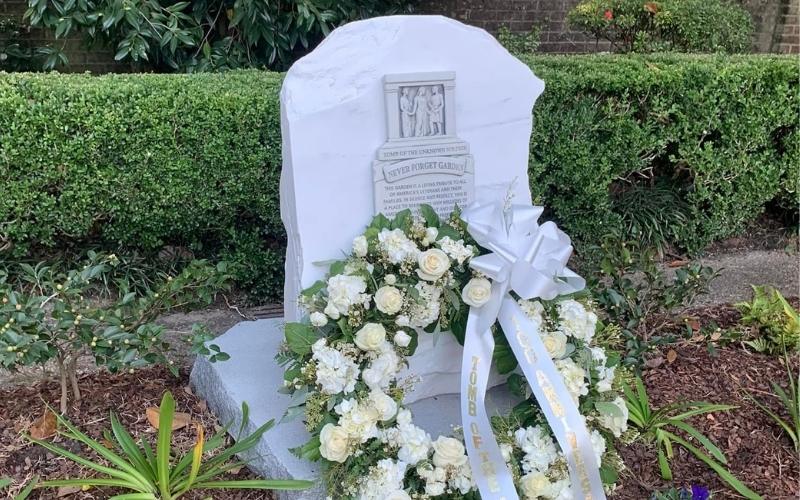 MOBILE, Ala. – Craigger Browne has sculpted numerous art pieces from marble slabs with fine-tuned precision over the years, and his great work can be found at yet another cherished location.

The Richards DAR House, which was built in 1860 and added to the National Register of Historic Places in 1972, is jointly owned and operated by the Daughters of the American Revolution’s four Mobile chapters. To honor the centennial of the Tomb of the Unknown Soldier, the DAR planted the Never Forget Gardens. However, to complete the project fittingly they desired a tombstone placard made of marble. Their person of choice to create the intended vision: Craigger Browne.

Browne is a Vestavia Hills native that studied graphic design at the University of Montevallo. After graduating, he decided to move to France to take up limestone sculpting. Soon after he transitioned to marble and began honing his craft in Carrara, Italy. Browne moved back to Birmingham to work but would make frequent trips to Carrara to purchase what he believed at the time to be the best quality marble in the world.

In 2011, due to Sylacauga’s annual Marble Festival, he made the fascinating discovery that there was marble of equal quality just an hour’s drive from where he grew up.

“I call it white gold,” said Browne. “It’s a little more dense which is great. That has to do with the fine crystalline structure which is about the size of glitter. If you can get nice, sharp edges, you can really get fine definition in this stone which you can’t necessarily get in other stone around the world. Another thing I love about this stone is how translucent it is. That’s where it it far superior to the Italian stone.”

Nevertheless, Browne still holds Carrara’s marble in high regard and once said comparing it to Sylacauga’s selection is like picking between “a Lamborghini and a Ferrari.”

Browne has been utilizing Sylacauga’s quarry ever since. He has no plans of stopping anytime soon because of the boundless amount of marble available in the area.

“The vein runs 400 feet deep, 32 miles long, and a mile and a half wide,” Browne explained. “It runs from essentially Fayetteville to Talladega, and they’ve just barely gotten started.”

With more than enough material to work with, Browne has been commissioned to hew numerous sculptures, including the “Sylacauga Emerging” statue that sits in front of the Municipal Complex and the Hellen Keller and Anne Sullivan monument at Ivy Green in Tuscumbia. When the DAR reached out to him, it was a simple decision to provide his services for a worthy cause.

“[The DAR] came out to the quarry and they were looking for stone,” Browne said. “I worked with them in terms of design and how to mount the plaque, what would work and what wouldn’t work. Sylacauga Marble was extremely generous. They donated the stone and the granite for the footing. I donated my time for it because it was an amazing opportunity. What an amazing tribute to our men and women in uniform that unfortunately don’t make it back.”