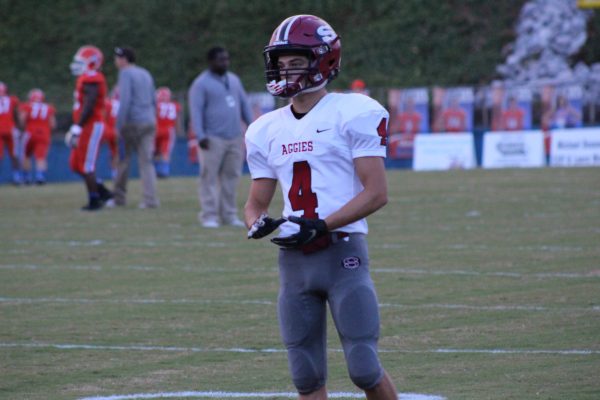 SYLACAUGA, Ala. – As the Aggies mounted a potential game-winning drive late in the fourth quarter Friday night against Mortimer Jordan, running back Lew Dale went down with a head injury later diagnosed as a concussion.

Dale was fiercely tackled by two Mortimer Jordan defenders, got up on his feet and began to make his way into Sylacauga’s offensive formation as time was running low. As Dale made his way back to the offensive side of the ball, he stumbled for multiple steps before play was stopped and he was removed from the field.

Dale’s Father, Mark Dale, told SylacaugaNews.com his son was sent to the emergency room at Coosa Valley Medical Center where he was diagnosed with a concussion.

Dale is questionable for this week’s rivalry game at Childersburg, but could be cleared by team doctors.

Below is the Alabama High School Athletic Association’s concussion policy.

Dale’s father said his son will sit out from practice today and start conditioning on Tuesday. “He will wear his helmet and do some running,” the elder said. “Dr. [Clay] Davis will evaluate him through the week. If he goes thru conditioning with no headaches he could possibly play this Friday.”