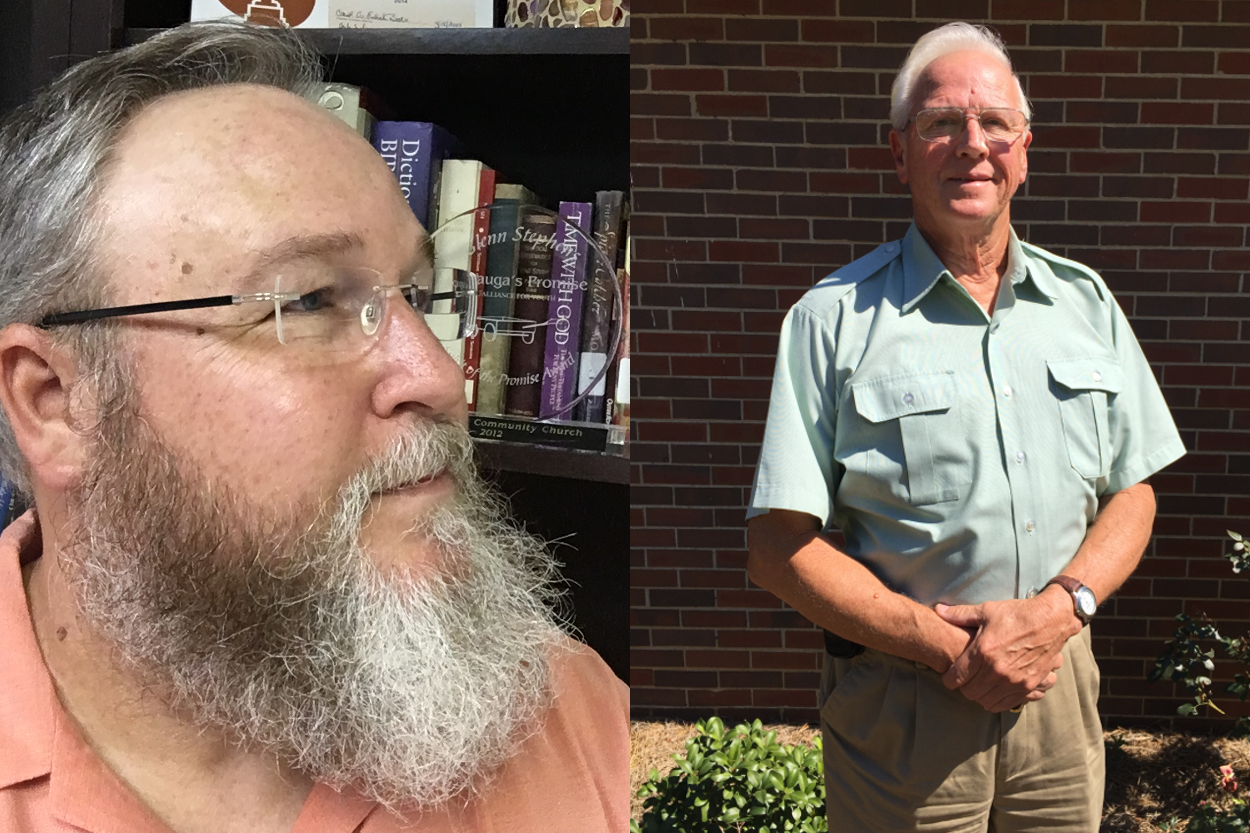 SYLACAUGA, Ala. – While four out of the five city council seats are being contested in run-offs, another race is underway for Mayor of Sylacauga.

Bryan Taunton and Jim Heigl are in a run-off for the mayoral seat, and everyone is talking about the race.

Everyone — on radio, television, social media, grocery stores, and restaurants.

Taunton, a local pastor at ChristPoint Community Church, says he is the answer to fixing the City’s problems. Heigl, a retired Kimberly Clark foreman and Vietnam veteran, says his leadership sets him apart.

Taunton told SylacaugaNews.com on Monday he would spend the last day before the election campaigning, knocking on doors, and delivering 500 flyers to people in areas where people need to vote. He said Monday night he would go into an “election detox” and await Tuesday. His plan for election day: get up and vote early.

“I’m not a poll hound,” said Taunton. “I will not be down there all day.” The pastor said he planned to spend time with mom who is in hospital on Tuesday and then head home to get on his tractor and bush hog and cut grass all day until the polls close. He said family and friends would come over to his home where he would await the results.

“People’s top gripes are fundamentally the same across the board,” said Taunton. “They want our streets paved. We definitely have infrastructure issues that we need to turn our attention to. I believe there is money in the budget that we can find to immediately find to start some of those paving projects.”

One of Taunton’s biggest platforms is economic development.

“The greater portion will be done, and a greater relief will come in the form of broadening our economic base. With me, that’s job one,” he said. “If we can bring in more industry, if we can focus on industrial development in this town, then we can broaden our incoming capital.”

With recent talk about a proposed 170,000 square foot shopping center coming to Sylacauga and invested development in the downtown area, Taunton said he understands business will come to town if all the right factors are in place.

“What’s going to happen is the retail centers that people are wanting … when people have more disposable income, then naturally retail centers will come in,” said Taunton. “The entertainment venues that people are wanting…when people have jobs, when people have disposable income, then those centers will come. So, we need to focus on industrial development. We do that by focusing on the big three that we have — that’s our marble industry, fiber optic bandwidth we have at our disposal here in the City, and again we need to focus on the new graphite mines down in Coosa County. And then through that, reach out to tier one, two, and three businesses and industries that are relatable to those industries.”

Bringing the business to town is the task at hand.

Taunton said his biggest strength that sets him apart from Heigl is business management.

“I have run companies and developed budgets larger than our city’s,” said Taunton. “So, this is a no-brainer for me.” Taunton said he used to be a problem solver as a vice president of administration for Hickory River Plantations going from office to office solving administrative issues.

“My weakness would just be my lack of on-hand experience in government. But you know what? City government needs to be run like a business,” said Taunton.

But Heigl says his leadership abilities and previous experience in city government towers over Taunton. Heigl spent Monday much like his opponent, making last-minute stops reminding people to vote.

The Vietnam veteran said he has a different approach for Tuesday.

“I plan to go down to J. Craig [Smith Community Center] and mill around the parking lot down there,” said Heigl. “I would like to meet the people and encourage them to vote for me as they come in.”

Heigl wants to make sure the services the city provides are unprecedented. “We need to give them the best service that their tax money will allow us to provide,” he said. “Infrastructure is very important. We’ve got to bring that up. We are losing too many citizens living outside the city limits, and I’d like to bring them back in, but I think the City needs to do its job upgrading its infrastructure, making it more attractive for people to come here.”

Like Taunton, Heigl also wants to bring business back to Sylacauga.

“I’d like to work with the CDA to build up our retail businesses or businesses in the downtown area,” said Heigl. “I really want to look at the overall appearance of our city. When you come into Sylacauga, I want to say ‘wow, this is a nice place.’ It used to be that way. We need to get back to that.”

Heigl said litter is a big problem in the city and wants to explore the option of having a litter patrol by taking a closer look at the ordinance. “We really have to keep our best foot forward,” said Heigl.

Heigl’s previous experience as a city councilman, and later as mayor following the death of Sam Wright, has allowed him to understand city government well.

“We cut the city 10% overhead. No jobs. No benefits. No salary. Just the overhead,” said Heigl. He said after managing funds properly, the city began making money during his time in office. “We had five-year bonds that were coming for renewal … we were able to cut those interest rates so far down that we were able to accumulate $2 million cash in a special fund for projects,” said Heigl.

He said the city was able to get paving grants and put $1.1 million into paving. He said it can be done again.

“My experience, knowledge, and leadership abilities I think just give me a little up on Mr. Taunton,” said Heigl.