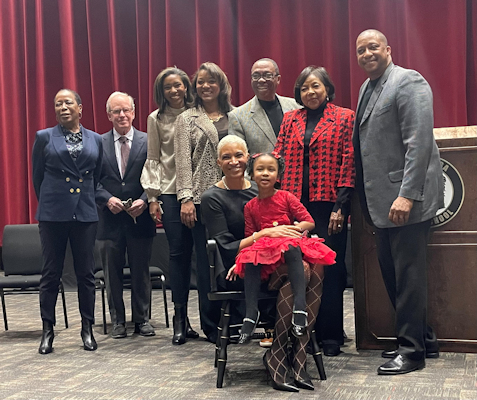 SYLACAUGA, Ala. – The Sylacauga City Schools Foundation honored longtime educators Jesse and Priscilla Cleveland with the organization’s 60th chair in a presentation at Sylacauga High School on Monday.

“I’ve long admired Jesse and Priscilla Cleveland and feel like it’s time that they received some very well-deserved recognition for their many contributions to Sylacauga and its excellent education system,” said Taylor Pursell, who along with his wife Lydia funded the $25,000 chair. “Both Jesse and Priscilla have impacted generations of young people in Sylacauga in many positive ways.”

Pursell reflected on meeting the two Clevelands, one as his eighth grade biology teacher and the other as librarian, on his first day in high school in 1968 which he recalled was also the first day of desegregation with the consolidation of East Highland School and Sylacauga High School.

Priscilla Cleveland is perhaps best remembered as a librarian at East Highland High School and Sylacauga High School and retired in 1998 after 33 years in education. She is a board member and a past president of the Sylacauga City Schools Foundation and the B.B. Comer Memorial Library Foundation and has served in many other civic roles including the board of the Sylacauga Housing Authority.

The Monday event was “much-deserved recognition for these two Sylacauga treasures who have committed their lives, efforts, time, and energy into our community for decades,” Sprayberry wrote earlier.

The Sylacauga City Schools Foundation’s mission is to enrich the quality of education for students by providing financial support to classroom teachers and programs. Each year, the foundation awards thousands of dollars in classroom grants to support learning, and, since its inception in 1988 as one of the first Alabama school foundations for K-12 education, has received almost $2 million in contributions from individuals and businesses.

Bronze plaques commemorating all Foundation Chairs can be observed in the main concourse of Sylacauga High School on the wall of “Patrons for Excellence in Education”.