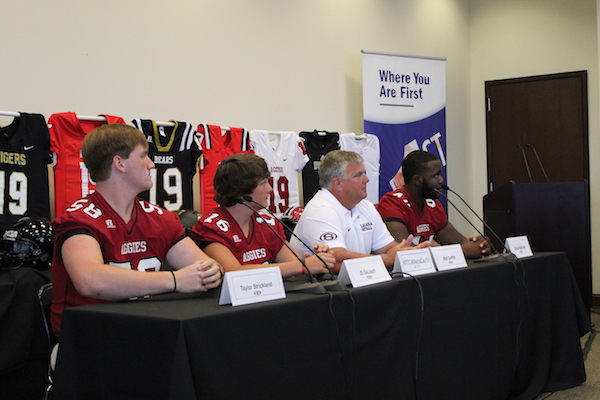 Last season, Sylacauga went 7-4 and lost to Jasper in the first round of the playoffs. This year, Griffith said the expectation is the same as it is every year: to win at least seven games, make the playoffs and make noise in the state.

The Aggies have to replace quarterback Daylon Keith, but Griffith spoke with confidence about the new starter JD DeLoach.

“He is a program player,” Griffith said. “He’s been with us since the seventh grade, running the same system. Very good feet. Tremendous improvement throwing the football all-season long. We’ve gone to Spain Park. We’ve gone to Clay-Chalkville. We’ve gone to seven-on-sevens and faced 6As and 7As all-summer long to show what that competition is going to be. We are very excited.”

“JD brings a lot to the table because he knows the offense so well. Very intelligent. He’s had a great summer.”

When comparing the two quarterbacks, Griffith said DeLoach is a “true quarterback.”

“With our running backs situation, we are very excited about Malik Pope and Jordan Ridgeway, and the situation at running back, to have a true quarterback manage the game makes us much better offensively than we were last year.”

“Matt could run the offense sometimes, and let me float as a head coach,” Griffith said. “We aren’t going to have that luxury. I have to be very focused now at practice offensively. So, the other coaches have to step up that slack that I can’t necessarily float and keep an eye on everything.”

Griffith offered praise to the other athletics programs at Sylacauga. In addition to being the head football coach, he is also the athletic director.

“I love Sylacauga because we are multi-sport,” Griffith said. “If we are playing football, we have got 14 to 16 baseball kids playing. You’ve probably got a handful of five to seven to eight basketball kids playing. A lot of that has to do with how well our coaches get along. We get along very well.”

Griffith said the athletics program loves multiple-sport athletes, and it is encouraged.

Griffith is entering his 15th season as head coach of the Aggies, amassing a total record of 90-61. The Aggies open the season with a road game against Leeds on August 23.