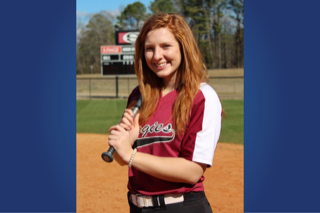 Maddi is the daughter of Richie and Tanya Ingram.  She has one sister, Morgan Ingram Shephard and is the grandaughter of Rick and Kathy Ingram, Kerry and Seretha Sprayberry and Ron and Sheila Lackey.

Maddi has maintained a 4.0 GPA throughout high school and is a member of Mu Alpha Theta and the National Honor Society.  She has had numerous scholarship offers, including ones from Huntingdon College, AUM, Univ. of West Alabama, and CACC but will attend Coastal Alabama Community College (Bay Minette) as a student athlete.  She plans to become an equine (horse) or large animal veterinarian.

Maddi has played softball since she was five years old. Playing in recreational leagues in Sylacauga and Chelsea, she was an all-star for several consecutive seasons.  She began playing travel ball at age 10 and has played for Rip-It (Birmingham), Birmingham Vipers, where she and her team were the 2014 ASA Southern Nationals runner-ups. As a current member of The Armory 18U team she has had the privilege of playing tournaments in Alabama, Tennesssee, Texas and Colorado.  She has lettered in softball for six years as a Sylacauga Aggie.

When asked about her favorite softball memories, Maddi replied, “We arrived at a tournament early so we decided to make a pitstop at Dick’s (Sporting Goods) where half of us fell asleep on the patio furniture and the rest of us ran around with life jackets and pool noodles.”  She also said that another great memory was, “The time we “accidentally” forgot Coach (Jay) Brooks as we left the school for a game.”  All of her conversations in the outfield with fellow senior teammate Kaleigh Smith are also a fond memory of hers.

Maddi has also played volleyball at SHS since the seventh grade. She lettered four years and has also been named to all-county and all-area teams.  At 10 years of age, she started jumping horses and has competed in hunter/jumper competitions.  She is a member of the American Quarter Horse Association and has competed in English and Western pleasure events. She was the 2011-13 EAHA All Around, Walk-Trot, and English Champion and 2013 ACHRA Reserve State Champion.

Outside of softball, Maddi enjoys horseback riding, spending time at the lake where she wake boards and rides jet skis.  She loves playing with and spoiling her dogs and chickens along with studying the Bible and reading devotionals.