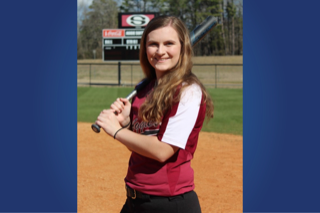 Kaleigh is the daughter of Steve and Cindy Smith.  She has two older brothers, Brenan and Jacob Smith and is the granddaughter of Judy Smith, Jeannine Wyatt and Larry Wyatt.

Kaleigh is on track to graduate as salutatorian of her class. She has a 4.34 GPA and has been on the A-Honor Roll since ninth grade. She is a member of the National Honor Society where she serves as treasurer, Key Club, FBLA (Community Service Chair), HOSA, FCA and the Sister 4 Sister program at SHS.  She has been TV 47’s Star Student of the Month as well as SHS Student of the Month.  Kaleigh is also a Questbridge National Prep Scholar and National College Match Finalist.

Kaleigh has played softball since she was 8-years-old.  She was an all-star for several years and played in Little League and Babe Ruth Softball Southeastern Regionals. She has played travel ball for Rampage, Intensity and most recently for the 00 Birmingham Bandits.  In 2017, her Bandit team came in second place in SEAA Nationals tournament. She has lettered in softball for three years as a Sylacauga Aggie.

When asked about her favorite softball memories, Kaleigh replied, “The time we

almost left a player at Dick’s (Sporting Goods) and had to send someone to find her, all the times Ansley Brown (former Aggie pitcher) and I did our handshake and all the bus rides where we jammed out.”

When not playing softball, Kaleigh spends most of her time participating in club activities and community service.  As Community Service Chair for FBLA this year, in collaboration with SAFE and the Sylacauga Housing Authority, she helped plan and implement Job Journey, a program aimed to teach ways to become more employable.  She and her partner, Rachel Kidd, placed second in the State FBLA competition for this service project and qualified for the FBLA Nationals, where they also competed last year.  She attends Full Gospel Tabernacle in Talladega Springs and is interested in working with some type of missions.