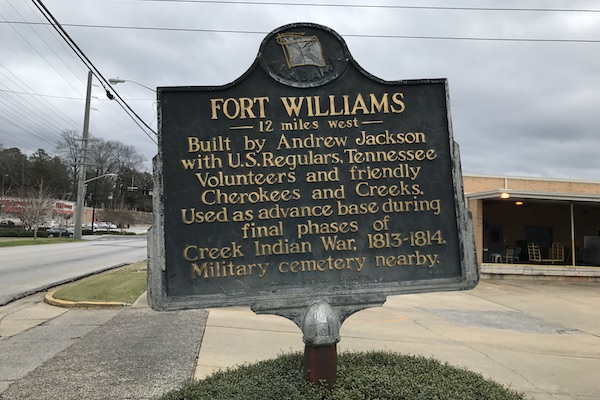 SYLACAUGA, Ala. – Twelve miles west of downtown Sylacauga lies the original Fort Williams. The Fort Williams Historic Marker is located in the heart of Sylacauga between the Post Office and Sylacauga Chamber of Commerce.

Fort Williams was originally constructed by Andrew Jackson with the help of the U.S. Regulars. Cherokee and Creek Indians as well as Tennessee Volunteers helped construct the fort. The fort was originally built in 1814 prior to the Battle of Horseshoe Bend as part of War of 1812. Jackson often transported military supplies down the Coosa River and stored supplies on a hill which overlooked the fort. After frequently placing supplies on the same hill, Jackson ultimately constructed the fort.

Once the Lay dam was constructed on the Coosa River in 1914, water levels began rising near Fort Williams. After years of weathering and erosion, the fort ultimately collapsed and was engulfed by the Coosa River.

A cemetery with at least seventy-eight veterans was constructed near the hill Jackson frequently used for supply storage and the fort. The cemetery was since removed in 2006 after a neighborhood was developed in its location along the Coosa River. Still, a “Memorial Garden” is present in the neighborhood where the Fort Williams cemetery once lied.

Built by Andrew Jackson with U.S. Regulars, Tennessee Volunteers and friendly Cherokees and Creeks. Used as advance base during final phases of Creek Indian War, 1813-1814. Military cemetery nearby.

The historic marker is unique in that it was not placed at or closer to the site of the historic setting. Still, most agree that the marker was placed in an appropriate location on Fort Williams street in Sylacauga. Unlike most historic markers, this marker is not written in complete sentences.

The Fort Williams Historic Marker was placed in 1953 by the Alabama Historical Association.