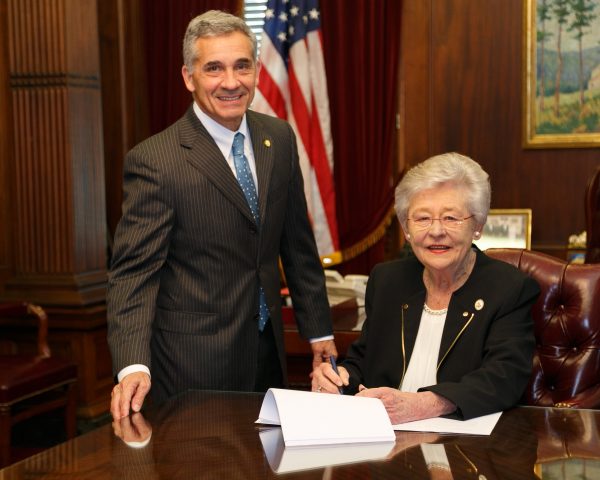 MONTGOMERY, Ala. – Governor Kay Ivey on Thursday signed Senate Bill 76, sponsored by Senator Del March, which provides the largest tax break in more than a decade to middle-class Alabamians.

The new law raises the threshold for claiming the maximum exception for state income taxes. For married couples filing jointly, heads of households, and single filers, the income threshold would be raised from $20,000 to $23,000. For married individuals filing separately, the threshold would be raised from $10,000 to $10,500. The overall impact of the bill is projected to be a $40 million savings for taxpayers over the next 10 years.

“I am proud to sign SB76 giving low-income and middle-income Alabamians much needed relief on their taxes. The economy in our state is booming and this tax break reflects that. Every dollar spent by the government belongs to the people and I am pleased to be able to give some of that money back,” Governor Ivey said. “I commend Senator Del Marsh for sponsoring the bill and leading the way in getting it passed through the legislature. I also congratulate Representative Reed Ingram for his great work in the House.”

“I want to thank Governor Ivey for her signature on this important piece of legislation and to Representative Reed Ingram for his work in the House,” Marsh said. “This is the first tax cut in Alabama since 2006 and I am proud that through smart, conservative management, the economy is doing well and the money for this middle-class tax break is available.”

The act became effective immediately upon signature by the Governor.

Whatever It Is
Zac Brown Band
The Foundation
Listen Live