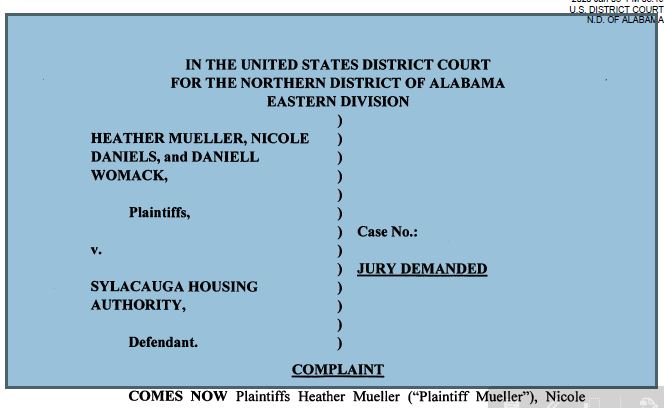 SYLACAUGA, Ala. – A lawsuit was filed against the Sylacauga Housing Authority on Wednesday, Jan. 8, by three former SHA employees.

The suit alleges the three plaintiffs were terminated for reporting fraudulent billing practices, which the lawsuit says they learned of after their hiring in 2018 from prior administrations of the SHA, and for highlighting discrimination and segregation in SHS housing units. There are over 600 units run by the SHA.

The plaintiffs allege SHA wrongfully used Sylavon Court as elderly or disabled housing, although it is not specified as such, to “prevent families and African Americans from residing in Sylavon Court.”

In September, CEO Michael Threatt and the plaintiffs were placed on administrative leave, and Sam Royster was named interim CEO. In November, the plaintiffs and Threatt were terminated.

Read the full lawsuit below: