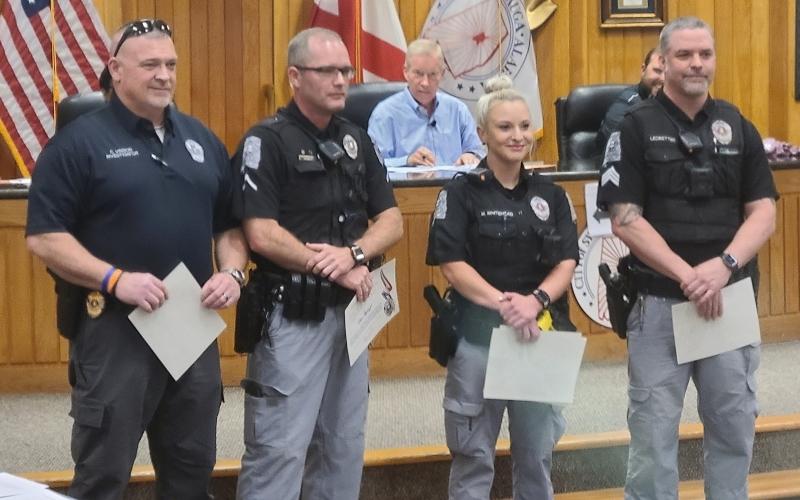 SYLACAUGA, Ala. – At Tuesday night’s city council meeting, five officers that serve at the Sylacauga Police Department (SPD) were awarded for “displaying exceptional professionalism and courage.”

The first incident came on Jan. 12 when Whitehead and Taylor responded to a 911 call from the Quality Inn regarding a reported robbery. When the two officers arrived, they talked with the victim who said that the suspect had assaulted and robbed the victim. The suspect was also armed.

After Sgt. Ledbetter arrived, the three officers determined that the suspect was still in a motel room.

Inv. Sgt. Vinson then came to the scene, and the four successfully gained entry into the room where the suspect was located. They apprehended the suspect without further escalation.

The second incident was on April 25. At approximately 4:30 a.m. Sgt. Ledbetter responded to a call about a possible armed robbery on Cleveland Ave. Ledbetter arrived at the location and talked with the victim who said they knew the suspect. The victim said he was followed by two individuals after leaving a residence and the two robbed him at gunpoint after trailing him for a while.

Sgt. Ledbetter had prior knowledge of one of the suspects, and he alerted officers to potential locations the suspect might go.

Officers spotted a running vehicle parked on the side of the rode with multiple subject sitting inside near where Sgt. Ledbetter suggested they could be.

Officers Whitehead and Wykoff along with Talladega County Sheriff’s Office (TCSO) Sgt. Matt Abrams and Deputy Brian Wheeler then proceeded with a felony traffic stop and all potential suspects were detained.

Two of the subjects matched the description given by the victim, and a gun that had been reported stolen was found in the vehicle.

Ledbetter, Vinson, Whitehead, and Wykoff were all on hand to receive their awards with only Taylor unable to attend.