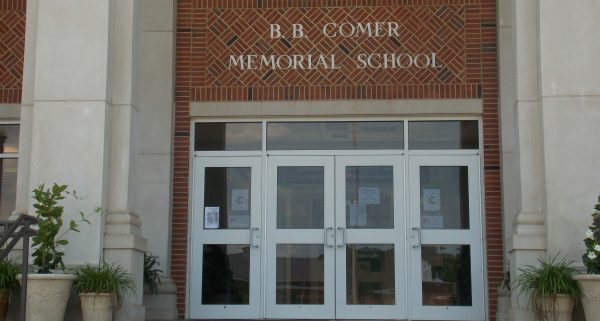 SYLACAUGA, Ala. – Across the railroad tracks from Avondale Mills, lies a local county school B.B. Comer. From the looks of the building, one could assume that school was relatively new. However, the history that represents the school goes much deeper than the modern time in which we live today.

B.B. Comer High School received its name from Mr. Braxton Bragg Comer who was the 33rd Governor of Alabama from 1907 to 1911. He later served as a United States Senator. One of Comer’s primary goals as governor was to increase funding for education and rise the literacy rate. To succeed in this initiative, he planted schools in each county in the state. Comer also served as president of Avondale Mills. This allowed the creation of many schools to be planted within the local Avondale facilities.

The first official record of the school was in 1911 when B.B. Comer Memorial School was located within the building of the Avondale Mills Credit Union and was organized as a private, one-teacher school. For almost 26 years, the school was based from the credit union until a new building was built, The Public Works Administration. Through the transition to a new building, the credit union was torn down and later became a parking lot.

In 1933, the elementary section of the school was adopted under the Talladega County Board of Education and the high school sector followed suit in 1936.

The Public Works Administration project in 1937 was extremely costly averaging about $142,000 even with Avondale Mills donating more than half the land. After the completion, the school was known for being the most modern and largest high school in the south. At the time, the school employed 41 teachers to serve the 1,300 students. Throughout the years, numerous classrooms were added on to the new building.

Unfortunately, on March 17, 1993, a fire ignited within the school destroying most of the original structure. For the three years following the fire, the school was under construction to rebuild. All construction was complete in April 1996. The new two story building included a new auditorium, classrooms, offices, and a library.

Today, the school stands as a mark of history and a high quality institution for education.