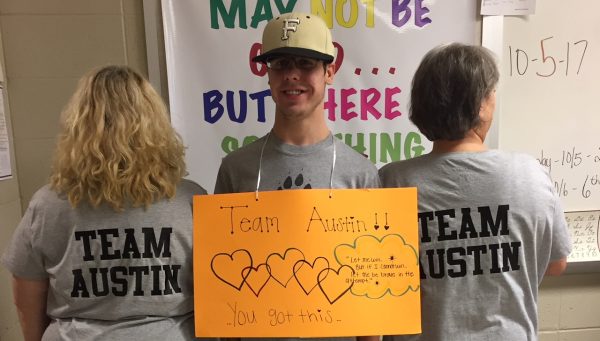 “This is a day our students look forward to every single year, but also a day we look forward to as educators,” said Kristen Harrell. Harrell is the Coordinator of Special Education for Talladega County Schools. “This day is great for everyone, and it means so much to the students.”

Special Olympics Coordinator Rachael Harmon told SylacaugaNews.com she began planning the event in July, and she was excited to see the event become a success. Over 38 athletes competed in Thursday’s Olympics, and those athletes were joined by hundreds of family members, friends, and school staff cheering them on during each event. “This is very exciting, and something I was looking forward to,” explained Harmon. “The students love this day, and so do their teachers and families.”

One of those 38 athletes participating on Thursday was Fayetteville High School’s own Austin Travis. Austin is 16-years-old and is currently in 10th grade. In Lincoln, he competed in the long jump and the 100-meter-dash where he placed third in both categories. Austin’s day of excitement, however, began far before entering the Lincoln city limits.

Before leaving for Lincoln, FHS held a school-wide pep-rally for Austin, sending him off in style. Members of his team had special shirts made that read Team Austin on the back. His teacher, Pamela McCurley said Austin loved the pep-rally, and filled him with adrenaline

Austin’s mother, Ashleigh Hudgins said her son looks forward to this event each year. She said Austin, who competed at the state level the previous two years, loves to run and compete, and participate in such a large social gathering. “He loves doing this and he loves being out here,” she stated. “It is wonderful to see him compete, but also be in a place where he can be himself. He  loves it out here.” McCurley interjected and explained, “This is the truest and purest form of human beings right here on this field. These are the sweetest children in the world.”

Lincoln High School also had a very special story. Cheyanne Reed will compete in the national games in Seattle in July. She will show her skills on the national stage in the 100-meter-dash and the running long jump. Reed’s teacher and biggest fan at the local games was none other than is Sylacauga native Blair Mayfield. Mayfield is the linebackers coach for LHS, but was even more passionate about his students on the field today than he is when his football plays on the turf on Friday nights. “This is just a great atmosphere. We love our students here, and have a heart for them,” Mayfield said. “Events like this warm your heart, and its great to see our students not only compete, but also make new friends and just have fun.”