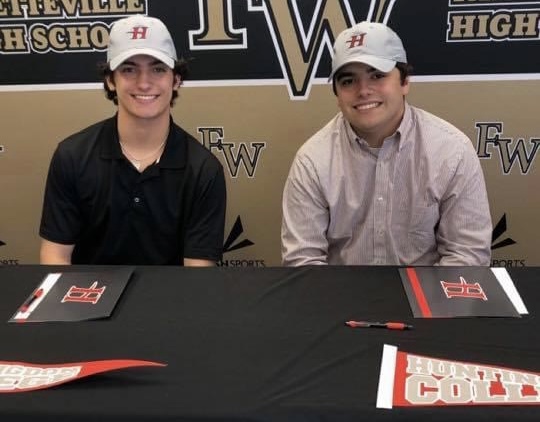 SYLACAUGA, Ala. – Twin brothers from Fayetteville High School are taking their football talents to the next level.

Joined by family and friends, Blake and Brady Ritchey, signed a letter of intent to play football at Division III Huntingdon College in Montgomery.

Both ended their high school careers with at least 35 straight starts under their belts.

“The Ritchey twins are great players and even better people,” said head coach John Limbaugh. “They will be highly successful because they are highly motivated young men. Huntingdon is getting a great gift in these two I am honored to have been their coach.”

Blake expects to play defensive end at Huntingdon, while Brady is expected to remain at running back.

The twins are grateful for the opportunity to play football at the next level.

“Getting this opportunity means a lot to me,” said Blake. “Knowing that someone sees something in me is an awesome feeling.”

“It is a true blessing to be given an opportunity to play a sport that I love for four more years,” said Brady. “Not to mention the feeling of finally seeing all of the hard work and perseverance from prior years pay off.”

Both brothers plan to major in Business.

Beautiful Crazy
Luke Combs
This One?s for You Too (Deluxe Edition)
Listen Live