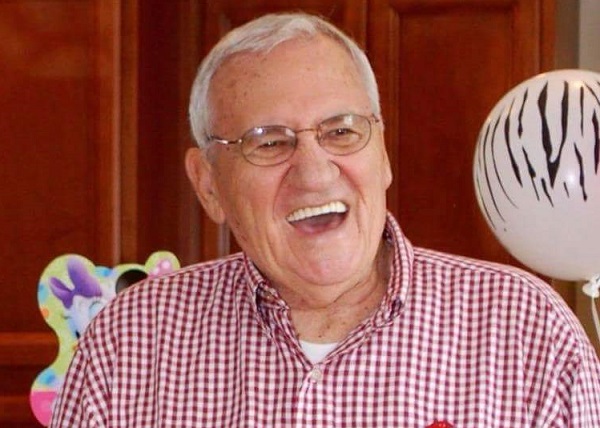 Edwin Dark was born in Sylacauga, Ala. on April 25, 1935 and lived in the Marble City several years before moving to Coosa County. He and his parents moved to live near grandparents Mae and Jim Solley. He enjoyed the company of his grandparents, especially hunting with his grandfather. Dark’s sisters, Linda Mae and Rebecca Ann, were born about 10 years later.

Around 1946, Ed’s parents, Lillian and Ruben, opened Dark’s Dairy, in Coosa County. It started small but grew rapidly to serve three cities and around 80 employees with wholesale and retail deliveries. As soon as Ed was old enough, he started helping out with home milk deliveries. He loved doing this because he met so many interesting people.

When he was in High School he attended Sylacauga Schools by getting a ride to town along with John Camp. They took any ride, even an ambulance one day. While in school, he played football for the Aggies.

After graduation, Dark decided to attend the University of Alabama. He attended the University for about a year before deciding to marry Anita Lovvorn. They married in 1954; both only 19 years old. Two years later, they welcomed their first child Emily. Their second daughter, Lori, was born five years later. There are currently five grandchildren and eight great-grandchildren.

He worked for the family dairy for several years before moving his family to Tuscaloosa in 1966 when he went to work at Perry’s Pride Dairy as a sales representative. Dark loved being near the Crimson Tide. He enjoyed his work, being able to meet customers, and selling milk and milk products in Tuscaloosa.

Dark moved back to Sylacauga in 1976 to work for his family’s dairy. Dark’s Dairy was sold a few years later to Baker and Son’s Dairy then to Barber’s Milk Company. Dark moved with the company as a sales representative for the next 30 years before retiring in 2005. Even after retiring, he worked part time for another five years to “put out fires.”

The whole concept of the milk business was service and quality for Dark. If a small store called him to say they were out of milk, he would take some to them if it was possible to get the product from the plant. He did the same for retail customers. He was in milk sales for a total of 50 years.

When in Tuscaloosa, Dark and his family attended Forrest Lake Methodist Church and Calvary Baptist Church. After moving back to Sylacauga, he made a life-changing decision and accepted Christ, rededicated his life to serving him, and was baptized at First Baptist Church (FBC) of Sylacauga along with his daughter Lori, who was 15 years old at the time.

“We wanted to make sure that Ed knew how much he is loved, appreciated, and thank him for faithfully serving his church and community,” said Tripp Dickson about Dark’s honoring at FBC last month. “Many of Ed’s friends shared entertaining stories and expressed their appreciation for his friendship.”

Ed Dark passed away after his many years of serving the church and community at age 82 at Grandview Medical Center. He is survived by his wife Anita Lovvorn Dark, daughters Emily Haney and Lori McGough, his five grandchildren and, eight great-grandchildren.