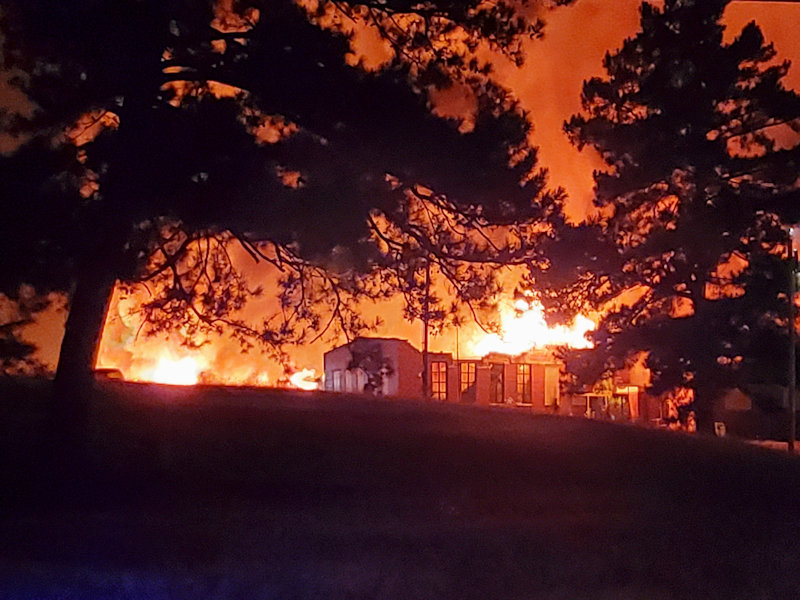 SYLACAUGA, Ala. – Area fire departments responded to a major structure fire at the old Sylacauga Board of Education building on W. 4th St. on Tuesday evening, with the Sylacauga Fire Department dispatched at 8:38 p.m. Hilltop photos from miles away to the north showed billowing smoke and glowing flames over the city’s nighttime skyline.

The former Sylavon Elementary School had not been in use since the BOE’s central office downtown move in 2016 which, along with the long-vacant Mountainview School, was transferred to the City of Sylacauga in 2018.

No injuries were reported, and an official told SylacaugaNews.com that the fire seems to have started near the center of the building, confirming that no active power was connected meaning no electrical cause. Firefighters contained the blaze and protected other structures including the Arc of South Talladega County and Sylacauga Housing Authority residences.

Originally built at the beginning of World War II, the elementary school was home to more than 300 students in first through sixth grades by the 1950s with a dozen teachers on staff. Its name was a hybrid of Sylacauga and Avondale Mills. To help meet housing needs as area population expanded with jobs at the Alabama Ordnance Works, Sylavon Court, operated by the Sylacauga Housing Authority, was constructed nearby.

At 10:30 p.m., the fire was no longer a hazard to surrounding buildings. An investigation is underway.