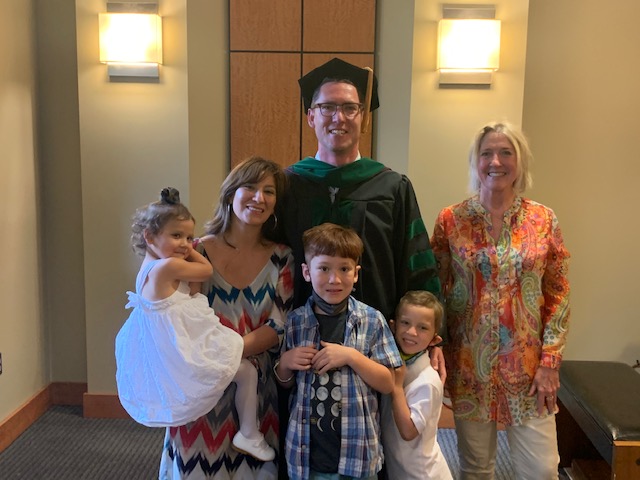 SYLACAUGA, Ala. – John T. Olsen is what they refer to as a non-traditional medical student. Olsen made the decision to pursue a career in medicine at the age of 27, and started medical school while married with children.

When Olsen made the choice to chase a medical career, he was already working in healthcare, and after seeing the day to day operations inside a hospital, he decided a career in medicine was what he wanted to do.

In California, Olsen was working 12-hour overnight shifts on the weekends while knocking out his undergrad courses in anthropology during the week. Upon graduation, and taking the Medical School Acceptance Test, Olsen was accepted into medical school in Dothan at the Alabama College of Osteopathic Medicine. Luckily for Olsen and his family, he had ties to the south and a few Alabama roots.

Olsen and his family packed their bags and moved roughly 2,200 miles where his medical school journey would begin, which eventually led him to Coosa Valley Medical Center where he spent the last two years doing his clinical studies,  training for excellence in clinical practice.

Now, Olsen has finished medical school at Alabama College of Osteopathic Medicine, but the last year was anything other than normal. Olsen fought through the virtual world like most of us have, and, because of the pandemic was not able to java a proper hooding ceremony after medical school graduation.

But Coosa Valley Medical Center made it happen.

Joined by friends, family and mentors in the medical field, Olsen was given a proper hooding ceremony in the chapel at CVMC by Dr. Mamoun R. Pacha.

“We are very proud, because this is something he does out of love and care. John is not looking for any recognition,” said Pacha.

Now, at age 35, Olsen will move to Fairhope to complete his residency at Thomas Hospital.