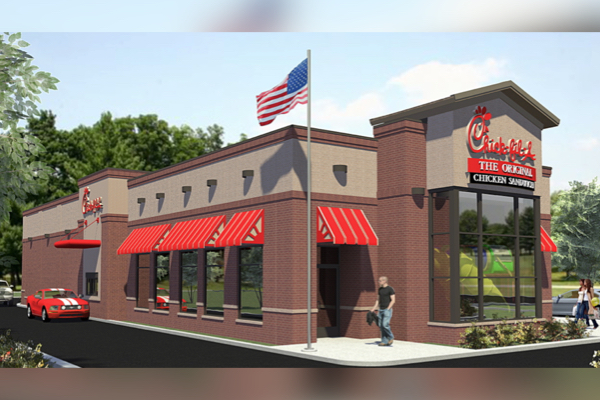 SYLACAUGA, Ala. – Chick-fil-A has named Micah Harris franchise owner of the chain’s first stand-alone Sylacauga restaurant as the hiring of upwards of 70 new team members begins in preparation for an early May grand opening.

When Sylacauga’s first Chick-fil-A opens at 75 MCS Blvd. it will be the realization of a dream for Harris who became acquainted with the Chick-fil-A during high school at the age of 17 and has worked for brand for more than 14 years in various roles from working as a team member, to being selected for the company’s Leadership Development Program where he spent a few years traveling the country to serve as interim manager at existing locations.

Harris was introduced to the brand while working his first job at a bookstore in his hometown when he recognized the local Chick-fil-A Operator, Mike Holmes. After a few months of Holmes visiting the bookstore, Holmes told Harris he was impressed with his friendless, the way he went above and beyond to serve the customers and offered him a job on the spot. Harris jumped at the opportunity and worked for Holmes for over eight years. During those years spent at the restaurant, Harris quickly fell in love with Chick-fil-A’s culture and realized it was a great fit for his entrepreneurial goals. His desire to mentor others while having a positive impact on those around him. This pushed him to pursue an opportunity at a corporate level and then on Valentine’s Day 2014, his hard work and dedication to the brand were rewarded as he was named owner/Operator of the Coastland Center Mall in Naples, Fla.

Making the move to Sylacauga is a dream come true for the Harris family. Both Harris and his wife were born and raised in Fultondale and nearly all of their extended family live in the surrounding Birmingham area. A graduate of the University of Alabama at Birmingham, Harris’ is thrilled to own the first Sylacauga restaurant and looks forward to serving the community. “We want to be a gathering place for the community that provides an opportunity for team members to grow and develop” said Harris. “We hope to create remarkable experiences for our guests.”

Harris currently looking to hire 70 team members, offering full-time and part-time positions in all areas of the restaurant, including leadership positions focused on talent, training and administrative support. Among other benefits that include scholarships for continuing education, Chick-fil-A restaurant team members appreciate having Sundays off, flexible schedules, and the family atmosphere fostered at the restaurant.

Named one of the “best places to work” by Glassdoor, Chick-fil-A is known for hiring, developing and retaining talent, offering a supportive workplace with opportunities for leadership development, respect for work-life balance and competitive wages.

Chick-fil-A team members are eligible for the chain’s initiative, Remarkable Futures, which provides $9 million in annual scholarships. Ranging from $2,500 to $25,000, the scholarships are based on leadership, community involvement and academic achievement. Over the years, Chick-fil-A, which employs more than 75,000 people through corporate positions and franchised locations, has provided almost $46 million to help pay for college.

The first Sylacauga Chick-fil-A location will include drive-thru service featuring two ordering lanes merging into a single lane for pickup as well as dining room and patio seating. The restaurant will be open Monday through Saturday from 6 a.m. until 10 p.m., offering a full breakfast menu until 10:30 a.m.

Note: Each Chick-fil-A restaurant is individually owned and operated and is a separate employer.