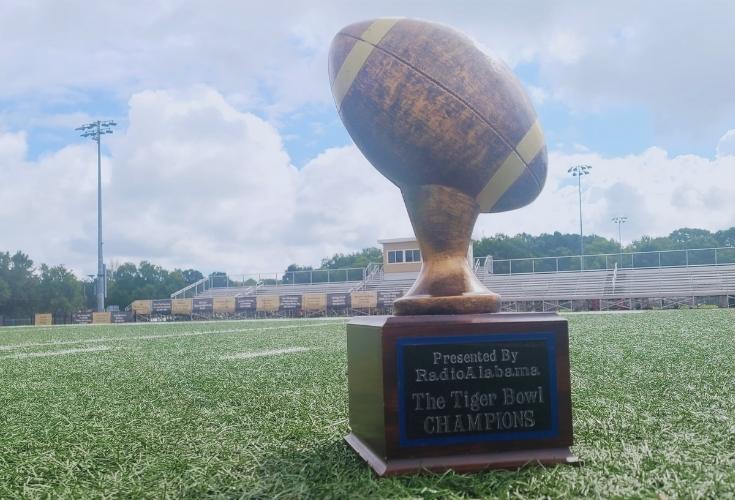 SYLACAUGA, Ala. – The annual cat fight between B.B. Comer and Childersburg on the gridiron will take place tonight for the third chapter that is now known as the Tiger Bowl.

RadioAlabama has been a major player in these two rivals getting together once again to settle their differences, this time at Legion Stadium Friday night at 7:00 p.m.

The storylines do not stop there. These two coaches are very familiar with each other. After all, Childersburg Head Coach Johnny Johnson was the offensive coordinator for Adam Fossett, who was the head signal caller at Childersburg before now having that same role at B.B. Comer High School.

RadioAlabama coined the name ‘Tiger Bowl’ when the game resumed in 2020. The RadioAlabama Tiger Bowl Trophy is awarded to the winning team after each football game, giving that school the right to display it in their trophy case until they play the next season.

“We want to keep that trophy. I tell Johnny that I want them to win every game on the schedule but this one, but it will be difficult tonight because Childersburg is much improved,” Fossett said. “They have great skill players and they are more physical on the lines of scrimmage this year. I have a lot of respect for what those coaches are doing over there and we will have to play our best to get that trophy again.”

On the other sideline, Johnny Johnson knows that his young cats will have their work cut out for them on the road tonight.

Coach Johnson said, “They have expectations for a reason. They have exceptional athletes and Coach Fossett and his staff will always have them prepared. We have to play our game, control the ball, stay away from turnovers, and reduce penalties.”

The RadioAlabama Tiger Bowl trophy will be given away tonight to the victors. I am going to go out on a huge limb and make a bold prediction, the Tigers will win!