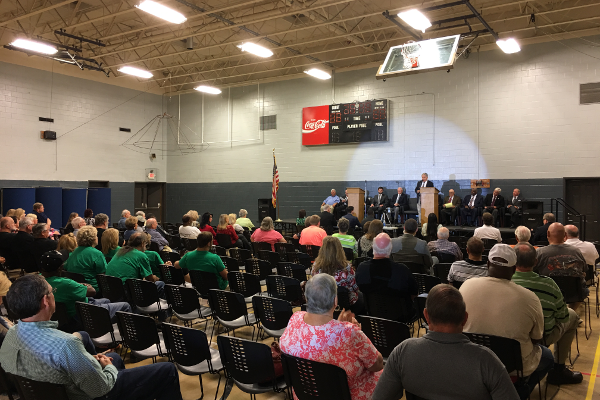 SYLACAUGA, Ala. – Ten candidates vying for positions on Sylacauga’s City Council and mayoral seat had their chance to make one last plea for votes at the J. Craig Smith Community Center Thursday evening.

More than 150 attended the media-hosted event showing their respective support and learning more about the candidates. Panelists Jimmy Dale Abrams of TV47, Anthony Cook from The Daily Home, and Michael Brannon from Yea!106.5 fielded questions from audience members and previously e-mailed submissions. Each candidate addressed the crowd in a five-minute opening speech followed by a one-minute response to three questions asked by the panelists. Both candidates were asked the same questions. State auditor Jim Zeigler emceed.

Only District 4 did not require a run-off, as Lee Perryman defeated incumbent and City Council president Rocky Lucas.

Fowler, a native of Sylacauga, said he wanted to help make tomorrow a better place for his hometown. In his opening statement, he said street paving and infrastructure were very important priorities for the city and that he wanted to hold a meet-and-greet after the election so constituents could get to know their councilperson and mayor. He claimed he had a different vantage point and vision being the youngest candidate in the running by keeping up with ever-emerging technology. When asked about an increased sales tax, he attempted to clarify an earlier statement he made saying he would not want one at the current time. Fowler recognized many in the City are on a fixed income and it would not be the right thing to do. He said he would support a minority and a woman on the Parks and Recreation Board and that he would like to help the department improve its facilities.

Heigl said he had been in Sylacauga since 1950 and that he had been a part of the past. Now, he said, he wanted to be a part of the future. After establishing his credibility of serving in the military, working in the White House communications division, and thirty-eight years at Kimberly Clark, he said he was retired and “has a lot of time” on his hands. The veteran said he really cared about the City and sees paving the roads as a priority along with improving sporting conditions and infrastructure. He said he loved the City and wanted to work together with the Council and voters. Heigl said he was not for an increased sales tax and when it came to a woman and minority serving on the Parks and Recreation Board, he supported the effort while stating the facilities need improvement.

Nix addressed the audience with a feel-good, positive-themed opening speech stating the community, and council, need to come together and unite. She said there should never be any division and that she could lead by example. When asked about training city employees outside the city limits for certain jobs and tasks, she said the City should make it a point to train them inside the City and plan the efforts together. Illegal drugs were addressed in District 2. Nix said that was not the only place they were a problem. She claimed the solution to stop drugs would be bringing more jobs into the City allowing criminals to stay off the streets. She also said there are laws in place to address rundown properties.

Smith explained in his opening speech that experience mattered, citing he served on the City Council before from 2008-2012. During his first term on the Council, he claimed 125 dilapidated houses were torn down and infrastructure improved with $1.25 million in paving roads. He said he was a man of principal with Christian values. He said qualified city employees are assets and education was very important when it came to training. On the topic of drugs in District 2, Smith highlighted a personal story of his son being involved with drugs during high school. He said he is a proponent of “tough love and lock them up.” He also reiterated blight and how during his previous time in office, it was taken care of.

Blackmon made no bones about the fact he had never held public office before but reassured the public he would have accountability for the City. Common sense was a trait he said would trump education and serving the citizens was something he wanted to do. Paving the roads was a need and accountability of where money coming in and out of the City was too. Blackmon said grants would be possible and recruiting new marble industry to town was important. He said he would have to be educated when it came to city funds and actions would be based on what certain divisions deserve. Street paving was reiterated and filling downtown buildings with businesses was key. On the topic of litter, Blackmon said litter bugs should pay a fine and if the ordinance officer does not enforce it, they should be pulled off and replaced.

Roberts, the incumbent, addressed the audience claiming he was forthcoming, open, and honest about his position, most recently serving on the current council. He said he did not support a sales tax increase and better budgeting needed to be a priority. One industry he focused on was a fiber optic network in the community. He said commercial development was important and claimed “we are not as small as we think we are.” Roberts said there must be a checks and balances approach to accountability. He addressed the need for a city planner and economic development in conjunction with the Chamber of Commerce. Roberts agreed with his opponent when it came to littering in the city saying there needed to be a fine, but took it a step further saying there needs to be “teeth to the enforcement.”

Carden, the incumbent and local business owner, said there are several things that need to be funded properly like the fire department and police department. He said roads needed to be paved and that he wants the best for his town first, then his district. When asked about a tax, he said he did not support a two cent sales tax but could support a one cent tax citing a sports complex down the road. He said he was aware many in the community were on a fixed income and he did not look to raise taxes to help support them. On the topic of the airport, Carden claimed a manager should be hired for it.

Davenport said he spent thirty years in law enforcement serving people and that this position would be full-time for him. He was concerned with where money was coming in to the City and going out from. Like other candidates before him, paving the streets was a priority and he said he would not support a tax raise. He said he wanted to communicate with everyone. He said a two cent sales tax was “the dumbest thing” he had ever heard. He reiterated no tax increase but stated bringing businesses into town would help support poorer families. Davenport said the airport was an important part of the community, especially for business and said it should be self sufficient.

Heigl served as former Mayor of Sylacauga for a short period of time prior to the last administration. He said in his opening speech there was a surplus and revenue was up when he left office. He said he had the knowledge and leadership to be mayor again. Heigl said he would re-open the lines of communication with other state elected officials and ALDOT stating his position on the Planning Commission added credibility. The veteran mentioned young athletes and said they deserved better practice and playing fields. He said he wanted to open up more civic areas for athletics. He concluded his opening speech addressing the need to update City website and the need to sell the City. When asked about the garbage contract, he said he did not like the current contract, which ends in December and claimed there was no reason why the City should subsidize $200,000 per year. He said the image of Sylacauga can be improved and that was why he served on the Beautification Committee. He said grants would help in the effort to clean the City more. Heigl was supportive of the idea of a city recruiter that would attract industry. He mentioned there has been $1.5 million spent in the last two years and no one knows where that money is. He said he wanted to track it down. The former mayor said he did not plan to raise taxes and that grants were important to look into and take advantage of. When it came to entertainment and younger people, he said he wanted to work together to bring in business to retain the younger crowd. He said the City needed its own people on the streets when it came to garbage pick-up and the litter needed to be patrolled. On the Parks and Recreation Department, Heigl said it needed a little guidance and ballfields would be needed in the future. He said he had the leadership ability and knowledge to get the job done.

Taunton, a local pastor, said there was a problem with complacency but that it was not a lost cause. He claimed with the right leadership, work could be begin to repair the heart of the City. He said he had honor and integrity. Of all the candidates, Taunton was the only one to personally call out his opponent stating we learn from our mistakes so we do not make the same mistakes again and that Heigl was voted out for a reason. He said he had measurable results and he knows how to make a budget work. He said he planed on improving infrastructure including roads, sewer, and drainage. He touched on, and expounded upon economic development. Taunton also talked about substandard housing and finding the money needed in the budget to get things done. The pastor, agreed with his opponent on taking a good, long look at the contract when it comes to an end and made comment the City should go back to it. When it came to the image of the City, Taunton said he was not pleased adding it does not represent who and what we are. He said the ordinance officer should be held accountable. Promotion of the City, he said, should fall under a job description of the mayor. While there might be an opening for a city planner, he said there might be just as equal of a need for a grant writer. On the infrastructure front, Taunton said he would break the budget down and leave it open for private industry to assist. He said a focus should be fire, police, health, and economic development. He did not want to raise taxes claiming it was not an option. He said by strengthening and expanding the economic base, it would bring more jobs into Sylacauga allowing for more entertainment possibilties. He reiterated the garbage contract and said the city is not cleaner than when the company started. Taunton said he had 33 years of business experience and when someone visited City Hall, he plans on everyone being professional. He address the Parks and Recreation Department claiming it is stretched too thin. He said there is bad lighting and if things were scheduled in advance, items might be accomplished better. He said he supported a sportsplex in the future but for now, economic development was the most important.

The runoff election will be held Tuesday, October 4. Polls will be open at 7:00 a.m. and will close at 7:00 p.m. SylacaugaNews.com will be watching the returns closely and have your election coverage Tuesday evening.