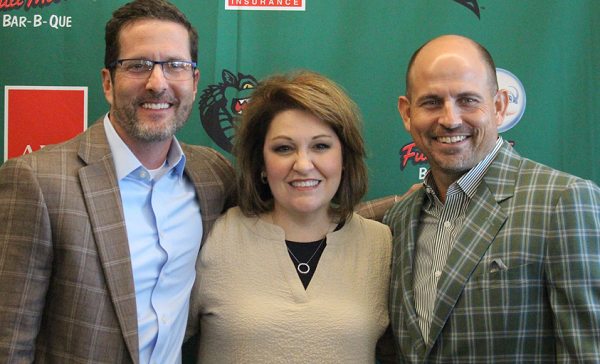 SYLACAUGA, Ala. – The UAB football team announced last week they would be wearing names of children from Children’s Harbor on their jerseys for the UAB homecoming game on Oct. 20, 2018. B.B. Comer Memorial Library’s Tracey Thomas’s son will be among the children memorialized.

Tracey Thomas is the director of B.B. Comer Memorial Library and of the director of RhizoKids International at Children’s Harbor. Children’s Harbor serves children with chronic and serious illnesses and their families in Birmingham and Alexander City. It offers free counseling for everyone involved, education services and tutoring, scheduled activities, an exercise room, a library, salon, laundry facilities, and more.

UAB’s Homecoming will be on Oct. 20 against the University of North Texas. The team will wear the jerseys with the child’s name on the back again.

The CEO of Children’s Harbor, Myrle Grate, spoke about the special relationship between the children and football players. I just want to say a huge, enthusiastic, and sincere thank you to Coach Clark, the coaching staff, and all the players who have given so much as they walk on that field with the names of 100 of our kids on the backs of their jerseys,” said Grate. “These larger than life athletes come in and insert themselves in these children’s lives and become heroes to them. It made such a huge difference to them because the players were so enthusiastic about it.”

Because of Brasfield and Gorrie sponsoring the Game-Day Experience, 250 children and their families are able to attend the Homecoming game this year.

Thomas’ youngest son, Jackson, was born in 2007 with a terminal form of dwarfism. “When we were informed the UAB football team wanted to honor some of the children who had been served through Children’s Hospital and Children’s Harbor, and that Jackson would be included, our family was very humbled because this is such a selfless gesture on behalf of this football program,” said Thomas. “After we were informed, we got to thinking about Jackson and had kind of an emotional time of reflecting about his life. He was so limited in his own physical abilities; he couldn’t walk, he couldn’t talk, he sure couldn’t run down a football field, but it doesn’t get away from me that these awesome men on the football team have eyes and hearts that recognize these kids for the warriors that they are and the battles they are fighting and are willing to take our kids’ names on the field. This is their homecoming game and their time to shine and they’re willing to share that with children like my son Jackson.

Jackson, called Jack Jack by his family, passed away in 2013 at five-years-old. Thomas shared that after someone loses a child, the parent misses hearing and seeing their name. She said it is a gift to be able to see her son’s name on the back of a football jersey during homecoming.

Thomas continued telling the story of her son, who is only one of around 100 who will be honored at the Homecoming game. Thomas shared 1 Peter 4:10 “Just as each one has received a gift, use it to serve others.” She thanked the players and coaches for being a light to her family and so many others to be a part of their special game. “I hope you know we will be cheering on the football team as you carry our child’s memory onto the football field, and we will be celebrating all those kids who are still fighting their huge battles they have to fight. What you are doing validates for us that their fight matters, and it matters what Jackson went through, and what these other children are going through right now,” said a choked-up Thomas.