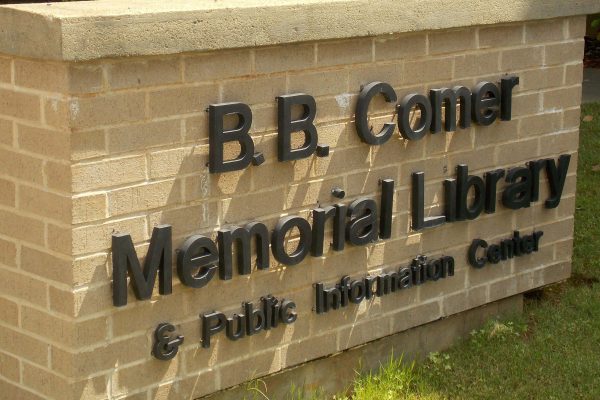 SYLACAUGA, Ala – Since Dr. Shirley Spears retired last month, the B.B. Comer Memorial Library has not missed a beat educating the community — a lasting tradition instilled by the former director.

“Having Cassandra King come to Sylacauga is an unexpected pleasure that I can’t take much credit for since one of our library customers, Sandy Lipham, worked tirelessly to make this noted author’s visit possible,” said former director Shirley Spears. “Many months ago, Sandy said that she knew someone who knew someone who could make the contact for us to get Cassandra to come to the Comer Library. I was dubious since Cassandra is the bestselling author of five novels and was married to Pat Conroy for a number of years before his death last year. The two were literary royalty in South Carolina and beyond. Nonetheless, I assured Sandy that if we could get Cassandra King, we would accommodate her at any time and on any date!”

King is the author of five novels, most recently the critically acclaimed Moonrise (2013), her literary homage to Rebecca by Daphne du Maurier. Moonrise is a Fall 2013 Okra Pick and a Southern Independent Booksellers Alliance (SIBA) bestseller. It has been described as “her finest book to date.”

King’s short fiction and essays have appeared in numerous journals and anthologies. Aside from writing fiction, she has taught writing on the college level, conducted corporate writing seminars, worked as a human-interest reporter, and published an article on her second-favorite pastime, cooking, in Cooking Light magazine.

She grew up on a peanut farm in lower Alabama saying, “we were about as country as country could be, but the women expected to be compliant and sweet.” King came from a family of readers, but she was not encouraged to write. While her mother wanted her to be more like Melanie Wilkes, King was aiming for Zelda Fitzgerald.

The program at the Comer Library is a part of King’s return visit to Alabama: “A Swing through Sweet Home Alabama.” Refreshments will be served from 11:00 a.m. until noon. After a reception, the program will be held in the Harry I. Brown Auditorium. The event is free and open to the adult public. King will have books to sell after the program with proceeds going to the Pat Conroy Literary Center in Beaufort, South Carolina.