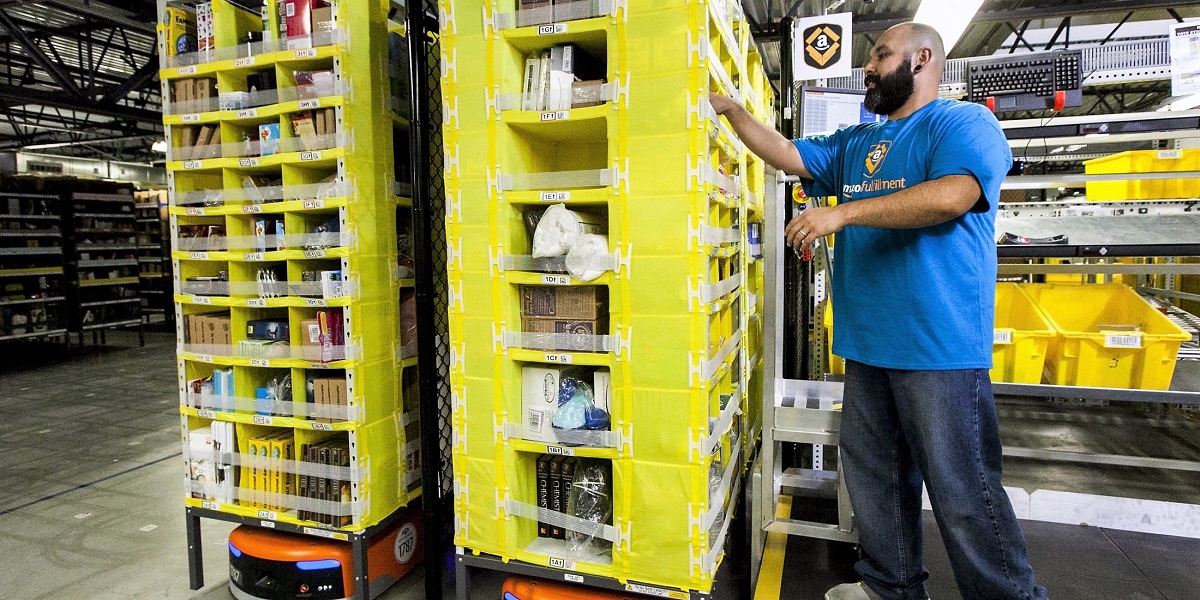 An Amazon employee works at one of the company's fulfillment centers. The 1,500 full-time employees at the newly announced Amazon facility in Bessemer will work alongside robots. (Amazon)

Amazon will build the 855,000-square-foot facility on 133 acres of property being purchased from U.S. Steel off Powder Plant Road in Bessemer, just minutes away from Birmingham. Investment in the project is expected to be $325 million.

The Seattle, Washington-based company confirmed its plans for the Alabama facility today in an announcement that said the project is moving forward, following a series of public meetings with local governments.

“We are thrilled to bring our first fulfillment center to the state of Alabama, creating 1,500 full-time jobs,” said Mark Stewart, Amazon’s vice president of North America customer fulfillment. “Alabama has a talented workforce and we look forward to making a positive economic impact in a state where we are committed to providing great job opportunities and an exceptional customer experience.”

Employees at the Bessemer facility will work with technology created by Amazon Robotics to pick, pack and ship items to the company’s customers.

“Amazon is one of the world’s most dynamic companies, and we couldn’t be more proud to see the company select Alabama for one of its high-tech fulfillment centers,” Gov. Kay Ivey said.

“This facility represents good jobs for our citizens and the beginning of a long partnership that I believe will see Amazon expand and grow in Alabama in the future.”

An analysis projects that the Amazon fulfillment center will generate a significant economic impact on Jefferson County and Alabama.

The facility will contribute $232 million to Alabama’s economic output each year and add $137 million to the state’s GDP, the study says.

Bessemer Mayor Kenneth Gulley said the Amazon project represents the largest single private investment in the city’s 131-year history. As an added bonus, the company has pledged to create a tuition-assistance program for its workforce.

“Amazon is bringing jobs and opportunity to our residents and students. I am particularly proud of the educational incentives Amazon will offer our young people: Get your high school diploma, work one year and receive $3,000 the next four years toward furthering your education,” he said.

Greg Canfield, secretary of the Alabama Department of Commerce, said Amazon’s project perfectly aligns with a strategic emphasis to facilitate the growth of tech jobs across the state.

“Amazon’s new fulfillment center in Bessemer will create a large number of high-quality jobs and feature cutting-edge automation and technological innovation,” Canfield said. “We’ve made recruiting technology-focused jobs a priority, and Amazon’s presence in the state will help us advance toward our goal.”

This is Amazon’s second project in Alabama. In June 2017, the company announced plans for a $30 million “sortation center” in Mobile to accelerate delivery of online purchases. The facility will have 1,000 part-time workers during peak periods.

Lee Smith, chairman of the Birmingham Business Alliance, said the successful recruitment of Amazon’s fulfillment center in Bessemer stemmed from a team effort that included a number of economic development agencies, utilities, transportation departments and others.

“Amazon’s investment in our community is a big win for the Birmingham region,” Smith said. “This state-of-the-art facility will be able to accommodate an expanding workforce and a changing economy as Amazon continues to prepare for its future.”

Amazon said full-time employees receive competitive hourly wages and a comprehensive benefits package, including health care, 401(k) and company stock awards starting on day one. Amazon also offers generous maternity and parental leave benefits and access to innovative programs like Career Choice, where it will prepay up to 95 percent of tuition for courses related to in-demand fields, regardless of whether the skills are relevant to a career at Amazon. Since the program’s launch, more than 16,000 employees have pursued degrees in game design and visual communications, nursing, IT programming and radiology, to name a few.

Jerry Underwood for Made in Alabama | © 2018, alabamanewscenter.com