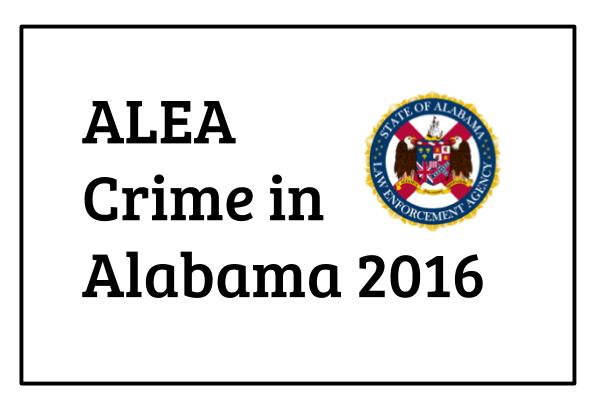 The report shows the total number of Part I crimes in Alabama increased by 2 percent from 2015 to 2016. These Part I crimes include homicide, rape, robbery, assault, burglary, larceny, motor vehicle theft, and arson.

Only 17 percent of that total property value was recovered.

Violent crimes accounted for 15 percent of the Part I crimes in Alabama, and the clearance rate for these violent crimes (39 percent) was significantly higher than that of property crimes (22 percent).

One positive note from the 2016 statistics was a decrease in the number of rape and burglary crimes in Alabama from 2015.

Notably, Alexander City ranked 17th in the state for cities with the highest number of juvenile arrests with a total of 49. Sylacauga, Talladega, and Childersburg combined for only 8 juvenile arrests during the same time period.

More information on Crime in Alabama 2016

Secretary of Law Enforcement Hal Taylor said the 2016 publication is part of a yearly statistical analysis through the Uniform Crime Reporting (UCR) program.

Crime in Alabama 2016 is produced through partnership with municipal, county, university, state and drug task force agencies. The full document can be viewed on ALEA.gov.