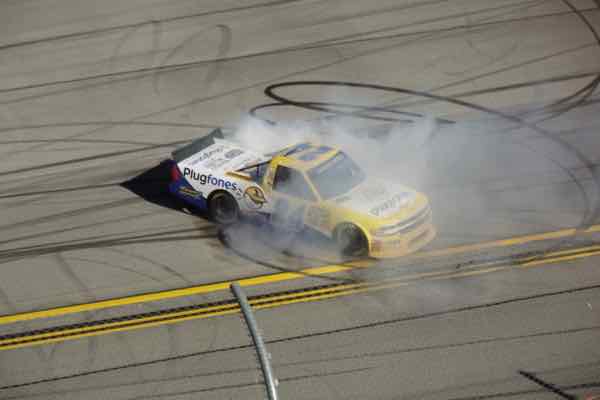 TALLADEGA, Ala. – Fairhope’s Grant Enfinger has raced at Talladega on several occasions, all in the ARCA Racing Series. But, while he was always competitive when the series ran at Talladega, he was never able to seal the deal and find his way to Victory Lane.

Earlier this year Enfinger was signed by GMS Racing to drive its No. 24 Chevrolet Silverado truck in the Camping World Truck Series, which seemed like his big break. But, when the team made him a part-time driver, some of the petals fell off the rose.

Now that rose is in full bloom as Enfinger accomplished on Saturday what he could never do on Friday evenings with his ARCA entry: get the win at Talladega.

The truck was strong all day, leading a race-high 45 laps, and getting a timely push from his teammate, Ben Kennedy, on a late restart to claim the win.

This marked his first ever win in the Camping World Truck Series in only his thirteenth start.

“It’s unbelievable! It’s my home track. It’s just so special. We came here as fans, that’s how this whole thing started. It hasn’t sunk in yet, it won’t for a while,” said Enfinger.

The top five was filled out with Spencer Gallagher, Timothy Peters, Rico Abreu and Ben Kennedy.

It was also an elimination race for the Camping World Truck Series Chase for the Championship, and both John Hunter Nemechek and Daniel Hemric needed good days in order to get off the hot seat as the field was paired down from eight drivers to six.

However, Nemechek suffered a blown engine early in the race and Hemric was caught up in two on-track accidents, the second one marring the truck so badly that his hopes ended then.

The final six leading up to the last four races of the truck season are Ben Kennedy, Matt Crafton, Timothy Peters, Johnny Sauter and rookies Christopher Bell and the top seed, William Byron.

The truck series continues their march to “Ford Championship Weekend” at Homestead-Miami Speedway by going to Martinsville Speedway this weekend.