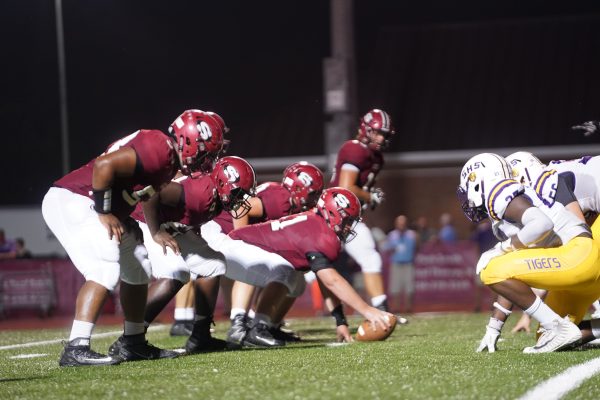 The Aggies have blown out two of three opponents so far this season, including Springville last Friday night to open region play in 5A Region 5. This week, however, may not be as easy.

Sylacauga will take its explosive offense on the road to Moody High School (1-1) who is also 1-0 in in 5A Region 5 in a game that may have postseason implications.

Sylacauga Head Coach Matt Griffith told the Aggie Sports Network on Thursday this game will not only affect seeding in the postseason, but could affect whether one of these teams even makes the playoffs.

“You’re fighting for not only a home playoff, but you’re fighting for a playoff spot period,” Griffith said. “There are gonna be one or two really good teams [in our region] that will be sitting at home [during the playoffs]. This is a tough region if not the toughest region in the northern bracket.”

Griffith was very complimentary of the Moody Blue Devils’ first year head coach Adam Wallace saying Moody is very well coached. “This team has really good kids doing what they’re coached to do,” he said. “We have to go on the road and get a road win.”

So how do the Aggies advance to 4-0 overall? Griffith gave a few keys to the game. First, Sylacauga must stop the two Blue Devil running backs.  According to the Aggies’ coach, Moody has two quick backs that can make plays in space.

Second, Griffith says Moody can be dangerous through the air. “They have a good quarterback and they’re a 50/50 team,” Griffith explained. “Moody likes to throw the football and we have to contain them on defense.”

Lastly, Sylacauga has to continue to do what it does best on offense – run the football.

Look for junior tailback Jordan Ridgeway to get a load of carries in this game. Last week in a 48-10 win over Springville, Ridgeway rushed for 218 yards on 17 carries for five touchdowns. He also added another score on a 10 yard reception.

You can listen to Friday nights game on Yea!106.5, the Yea!106.5 app, the Yea!106.5 website. You can watch a live video stream of Friday’s game on AggieSportsNetwork.net/watch-live.