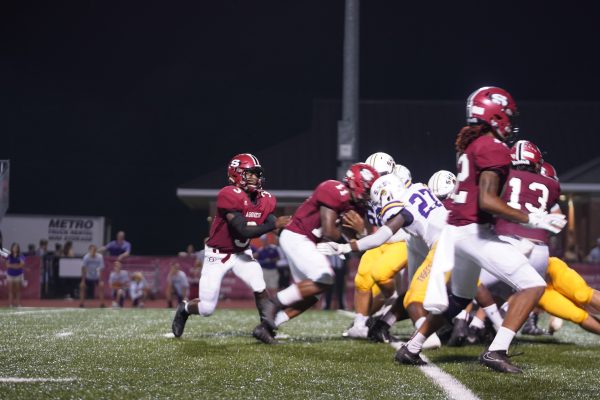 SYLACAUGA, Ala. – Four games have passed in the regular season and the Aggies still have an unblemished record, and after knocking off region foe Moody 21-14 on the road last Friday night, the Aggies find themselves highly ranked going into homecoming week.

When the Aggies (4-0) take the field Friday night against what Head Coach Matt Griffth calls a “very talented football team” in Mortimer Jordan (3-1), Sylacauga will have more than its record beside its name. According to Alabama High School Athletic Association rankings – voted on by sports writers across the state – the Aggies big one over Moody was enough for sports writers to vote the team the sixth best team in Class 5A in the state.

Here how the top 10 in Class 5A stands going into week 5:

Friday will be a tough test, and the Aggies will have to play nearly perfect football to keep their ranking. “”We’re not beating a team like Mortimer Jordan if we continue to make mistakes,” Griffith said. The coach reminisced on last week’s game at Moody where the Aggies thoroughly outplayed the Blue Devils, but could not get out of their own way until quarterback Daylon Keith – who played with a leg injury – scampered into the end-zone in the fourth quarter for the game-winning score.

What can you expect when Mortimer Jordan – also the Blue Devils – takes the field Friday night? MJHS runs an offense very similar to Sylacauga. Griffith explained the MJHS staff spent two days a few years back with the Sylacauga coaching staff learning how to execute the Aggies’ deadly option attack.

“We’ve got to stop their option attack,” Griffith explained. “They run a similar offense to what we do. You will see a lot of similarities. This is two good football teams and it is going to come down to who makes less mistakes.

The Aggie Sports Network will begin its radio coverage at 6:00 Friday night on Yea!106.5 and the Yea!106.5 app available in the iTunes App Store and Google Play Store. Live video coverage will begin at 6:45 on AggieSportsNetwork.net.