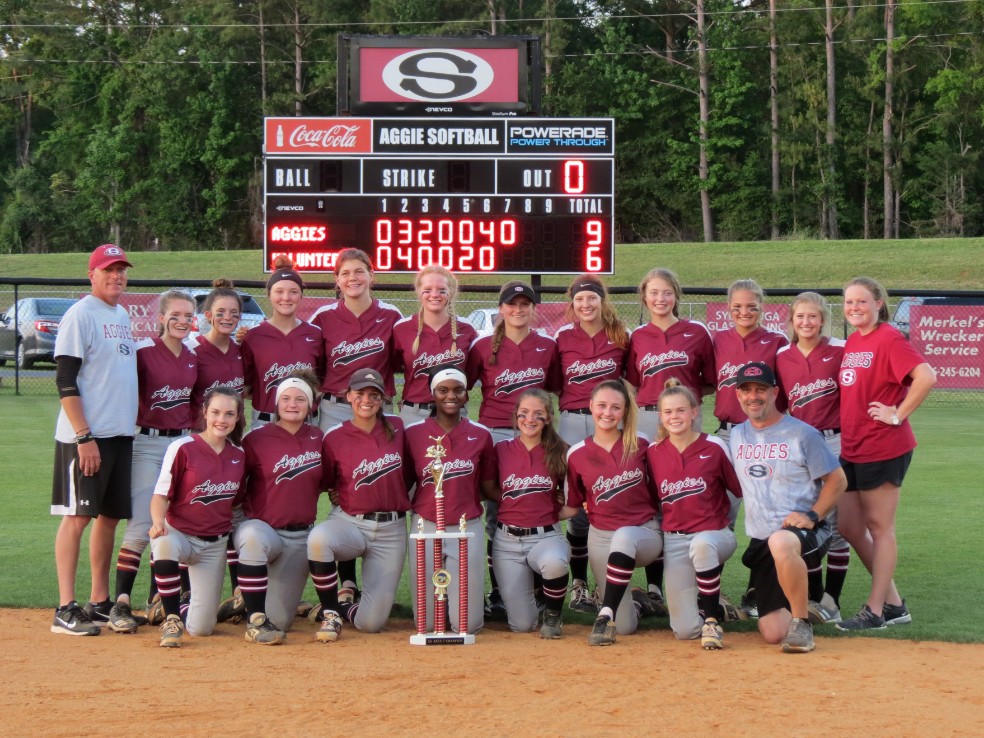 SYLACAUGA, Ala. – Sylacauga head coach Jay Brooks had a message to his team after the thrilling walk-off victory over Clay-Central Wednesday night.

“I don’t know if I’ve ever been this proud of a group of kids, you never quit,  you stayed on it.  That is a team effort and we told you that somebody was going to have to step up and do something great and they did and it’s awesome because nobody ever quit. You did not quit.” – Head Coach Jay Brooks said to the team.

Suffering a tough loss Tuesday to the Volunteers in extra innings, the Lady Aggies were left hungry for victory.  As a reminder, the words “Let’s Eat” were written on their dugout’s message board.

Wednesday’s first contest saw Sylacauga chew up Munford, eliminating them from the tournament.  The Aggies then took a huge bite out of the Vol’s momentum with a come from behind victory, forcing a third and final matchup between the two schools Thursday afternoon.

The Aggies still feeding off Wednesday night’s victories, took an early 3-0 lead in the top of the second. Raegan Wills and Neeley-Scott Wilkinson started the inning off with back-to-back base hits.  Both score on consecutive RBI singles from Kaleigh Smith and Madison Martin.  Aurielle Turner reached base on a fielder’s choice and with two outs,  the Lady Vols attempted to throw her out when she took off for second on a steal.  Martin slipped across the plate as Turner’s steal attempt was successful.

The 3-0 Aggie lead quickly disappeared in the bottom of the second.  Plating four runs, Clay-Central took a 4-3 lead.

Maddi Ingram lead the third inning off with a double for the Aggies followed by two run homer over the left-center fence by McKenzie Merkel, giving Sylacauga a 5-4 lead.

After a scoreless fourth inning, the Lady Vols took the lead scoring two runs in the bottom of the fifth.

Behind 6-5, in the top of the sixth, Sylacauga’s Martin got a two-out rally started with a bunt single.  Turner then found her way on base with a hit of her own.  Martin then scored on Kaylei Horn’s RBI single and Turner scored on an error. Ingram was walked giving the Aggies two base runners.  Producing a big hit once again, Merkel pushed Horn and Ingram across the plate with a two RBI double giving the Aggies a 9-6 lead.

The Aggie defense shut Clay-Central down for the remaining two innings retiring six straight Vol batters to claim the 5A Area 7 tournament championship.

Relieving a fatigued Lani Varner, who pitched 20 plus innings in the tournament, Lorel Bryant picked up the win in the circle for the Aggies, allowing two runs on five hits and four walks while striking out four in six innings.

Following the victory, Sylacauga High School athletic director, Matt Griffith informed the Lady Aggies that it was indeed the first area championship for the softball program in school history.

Sylacauga went undefeated in regular season area play with a 4-0 record, claiming the season title and claimed the area tournament title with 3-1 record.

Now standing at 17-9-2 on the season, the Aggies are headed to the 5A East Regional tournament in Oxford next Friday.  The tournament will feature the top two teams from each of Class 5A’s Areas 5, 6, 7 and 8.