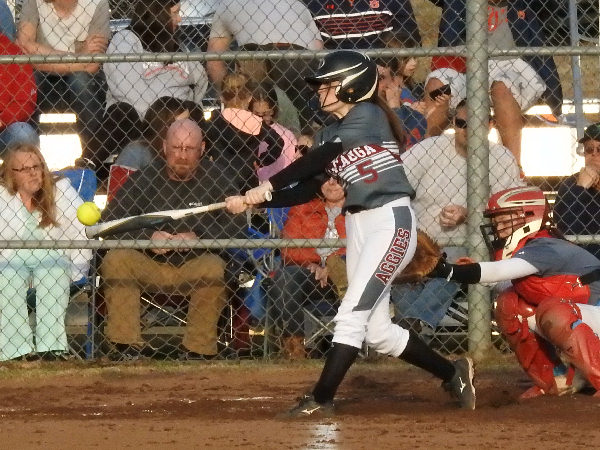 NEW SITE, Ala. – Sylacauga softball defeated Horseshoe Bend 13-0 in last night’s contest for its fifth win of the season.

The Aggies shutout the Lady Generals with a solid defensive effort, committing only one error behind pitcher Lani Varner. Varner pitched a complete game and struck out five while only giving up three hits.

Leading 2-0 heading into the top of the fourth, Sylacauga added two more runs on an RBI single from Mason Porch and Aurielle Turner’s sac-fly to center field.

Sylacauga plated five more runs in the fifth inning on five hits. Kaylei Horn got the bats going with a single followed by consecutive RBI doubles from Varner and Ivey Waller. Porch and Brighton Clary helped add to the run tally, each with RBI base hits to give the Aggies a 9-0 lead.

After a scoreless sixth inning, the Aggies tacked on four more runs in the seventh.  Madison Martin led off with a shot down the left field line for a double and scored when Porch blasted a triple deep into left field.  Turner’s base hit pushed Porch across the plate and was followed by Sylacauga’s fourth consecutive hit of the inning with Clary’s base hit.  Neeley-Scott Wilkinson drove Clary home for the final run with a double to center field.

Offensively the Aggies had 13 hits which include five extra base hits.  Mason Porch led the team, going 3-4 at the dish with 3 RBI’s and two runs scored.

Sylacauga advances to 5-5 on the season, and will host Childersburg tomorrow night in its home opener at Pinecrest Park. Watch live on The Aggie Sports Network Facebook page. Listen live on the RadioAlabama Sports app channel 4. Sylacauga softball is brought to you by Wright Tire and Service.