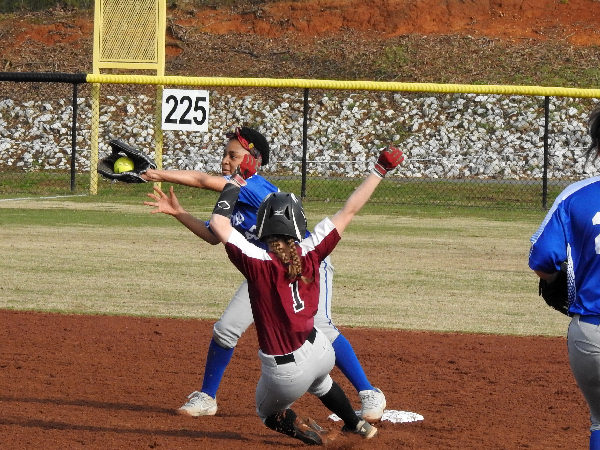 LINCOLN, Ala – After a three and a half hour delay and a change of venue on Friday afternoon, the Sylacauga Aggies faced off with Munford in the first round of the Talladega County softball tournament.

The Aggies fell to the Lady Lions, 2-1, in the contest and quickly found themselves in a deep hole to climb out of. “When you have to sit and wait to play for three and a half hours, it can get to you mentally sometimes” explained head coach Chad Wilkinson. “I thought we came out and competed well against Munford. Lani Varner kept us in the game as far as pitching and gave us an opportunity to win the game. In the end, we made a few mistakes that kept a few runs off the board and we didn’t hit the ball real well. I credit Munford. They found a way to win. It’s tough when you lose by a run in the opening round because that puts you in the loser’s bracket.”

Facing adversity and backed up against a wall, Wilkinson explained, “We changed our approach of how we do business before we got on the bus the next morning to take on Winterboro.”

The Aggies wasted no time jumping on the Bulldogs. Showing no mercy, they came away with a 21-0 victory. “The team responded with something that I haven’t seen yet, but I knew it was in them,” said Wilkinson.

The following contest paired Sylacauga up with Talladega Central which just lost to Fayetteville. Winning the contest 12-1, the Aggies awaited their next opponent.

Munford, who was sent to the elimination bracket by Lincoln, defeated Childersburg setting up a rematch with Sylacauga.

Looking for redemption, the Aggies jumped out to a 2-0 lead in the first inning and never looked back. Allowing the Lady Lions one run in the third inning, Sylacauga answered back in the fourth with a another run to secure a 3-1 victory.

Winning in three straight contest, the Aggies were ready for an afternoon showdown to see which team would face Fayetteville for the championship. That opponent turned out to be none other than long time tournament rival, the Lincoln Golden Bears who had lost to Fayetteville earlier in the day.

The two schools have faced each other in the past couple of years in the tournament’s championship game, with the Lady Bears besting the Aggies each time.

After two and a half scoreless innings, the Aggies grabbed a 2-0 lead in the bottom of the third. Lincoln knotted the score up in the top of the fourth. The Aggies were unable to produce any runs in the inning’s bottom half as the time limit under tournament rules expired, therefore sending the contest into extra innings and utilizing the international tiebreaker rule in which each team starts with a runner on second base at the beginning of their half inning.

With neither side scoring in the fifth inning, Lincoln led off the top of the 6th with a two run homer, giving the Bears a 4-2 lead. Only scoring one run in the bottom of the sixth, Sylacauga suffered their second heartbreaking one run loss in the tournament and ended their hopes of reaching the championship game.

“Lorel Bryant pitched an awesome game for us,” said Wilkinson. ” Lincoln got a clutch homerun and we lost by a run. Regardless of the loss, I’m super excited about the performance of all the players, their grit, their determination to fight every inning of play. This was a great tournament for us mentally and physically going into area play this week. We’re ready to play ball.’

“Credit goes to everyone for our success, not just our pitchers,” explained Wilkinson. “We played solid on defense all weekend. It was a team effort all the way around and I’m really proud of them.”