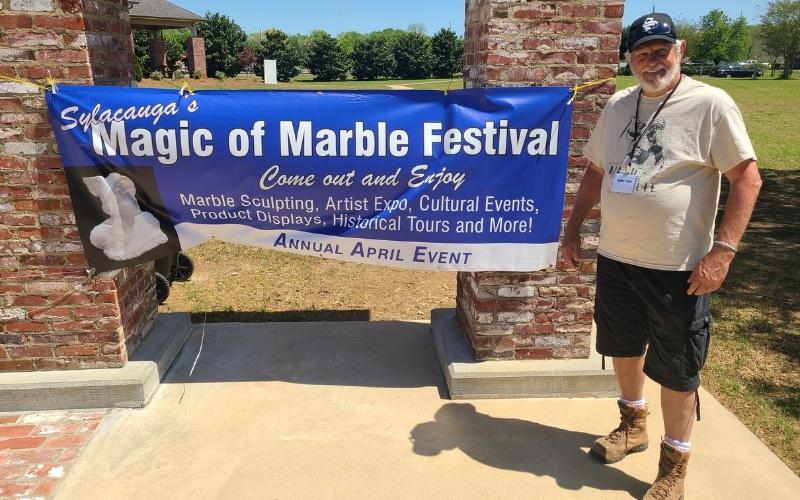 SYLACAUGA, Ala. – The fourteenth edition of Sylacauga’s famed Magic of Marble Festival is officially in the books.

The two-week spectacle of marble dust filling the air throughout Central Park as sculptors both local and from all over the country and world created new artistic masterpieces has come to a close after a successful eleven days. The festival began on Tuesday, April 5, and finished this past Saturday, April 16.

“You’d be surprised how many people live here in Sylacauga that know that the marble quarries are out there but don’t know [much more] about the marble,” said Randy Clark, one of the hosts of the Magic of Marble Festival.

Really, only the tip of the marble vein in the area has been tapped into. The stretch of marble runs 400 feet deep, 32 miles long, and a mile and a half wide according to local sculptor Craigger Browne.

Browne has attended every edition of Sylacauga’s Marble Fest — in fact, the marble is what initially drew him to Sylacauga.

He tends to sculpt multiple pieces every festival, and near the end of the second week, Browne was working on something that pays tribute to three different bountiful resources of Alabama: cotton, longleaf pine, and white marble.

The piece is an ode to the old Plank Road Station in Alpine near Winterboro High School. Prior to the introduction of railroads, the use of plank roads was integral for transportation.

While there are Marble Fest veterans like Browne, Bill Cook, Jr., and Frank Murphy, some are embarking on their initial journeys as marble sculptors.

This was Lew Peters’s second Magic of Marble Festival, and Peters noted that he learned more tips and tricks this time around than the first. The sculpture he was finishing up was a lion with a bass fish engraved on the side of the beastly figure.

Host Randy Clark had a story about one new attendee that stuck out to him.

“Jennifer [Linders] from Springfield, Missouri, she is a traveling nurse,” Clark detailed. “She’s been in the nursing profession over twenty years, and she decided she wanted to do something else. She started sculpting only a year and a half ago. To tell you how different these sculptors are, she’s the only one I’ve ever seen that uses her [smartphone]. She would look at her phone, sculpt a little bit, and look back at her phone.”

Clark also explained that there are three different types of sculpting methods which include electric sculpting with power tools, air-powered sculpting, and, as Clark put it, “old-fashioned” sculpting with hammers and chisels.

The majority of pieces once finished were taken to be displayed at the B.B. Comer Memorial Library, either in the sale room or in the lobby. The top seller was a sculpture of Mary holding Baby Jesus and went for $5,000.

The center piece added to the lobby’s collection was sculpted and donated by the featured artist from Italy, Francesco Basini Gazzi.

For next year’s fifteenth running of Marble Fest, Clark and others are discussing with Marble Festival chairman Ted Spears the possibility of pushing the multi-day event further back in April and avoiding Easter weekend.

However, no matter when it happens, Clark and company believe that the pride and tradition found in Sylacauga’s Marble Fest will attract people from all over for years to come.

Assets of the Marble City: Close enough, but far enough away