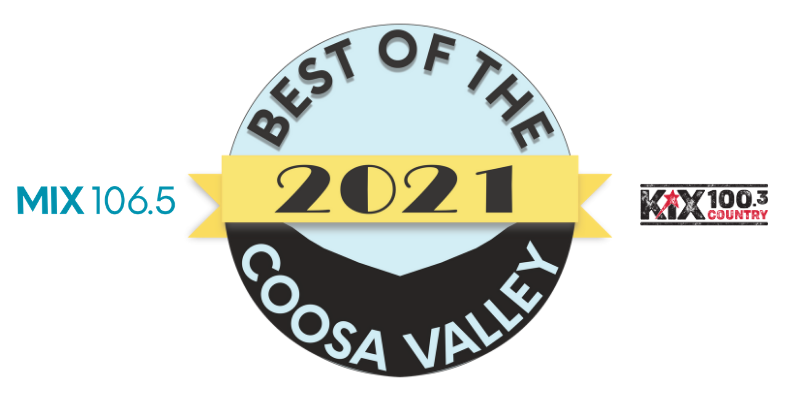 SYLACAUGA, Ala. – In January, the team at RadioAlabama’s MIX 106.5 and KiX 100.3 set out help stimulate business growth and awareness by having the public voice its opinion on its favorite businesses throughout the Coosa Valley. Today, we meet 2021 Best of the Coosa Valley winners!

RadioAlabama’s annual Best of the Coosa Valley award is a roadmap to the best businesses and service providers along the Hwy. 280 corridor chosen by the residents and patrons who rely on them. In January, a nomination window opened in more than 125 categories. The top three nominations moved on to the voting round where more than 100,000 votes were cast over the course of three weeks.

“Best of the Coosa Valley has been a success since we launched in January,” said RadioAlabama Executive Vice President Michael Brannon. “We have seen so much interaction from the public and support in local business. The response has been incredible and we are thankful locals have participated in this effort. For businesses, it’s reassuring to know how much support we all have, especially as we start to see life returning to a sense of normalcy.”

“As everyone is so anxious for everyone to return to normal, this popularity contest is really important recognition of the busineeses and professionals that have worked so hard to serve the area,” said RadioAlabama President and CEO Lee Perryman. “It’s important for businesses as there is a strong desire to attract more customers. With consumers re-entering the spending-arena, this recognition will help local businesses stand out.”

Brannon said Best of the Coosa Valley will become an annual event. Winning businesses will be provided Best of Coosa Valley banners and window decals for prideful display.

Editor’s Note: Two weeks ago, RadioAlabama was made aware of an email scam called the Sylacauga Award Program allegedly based out-of-state stating winners could purchase awards for their recognition. Note: this is not, in any form, a RadioAlabama-sanctioned event.