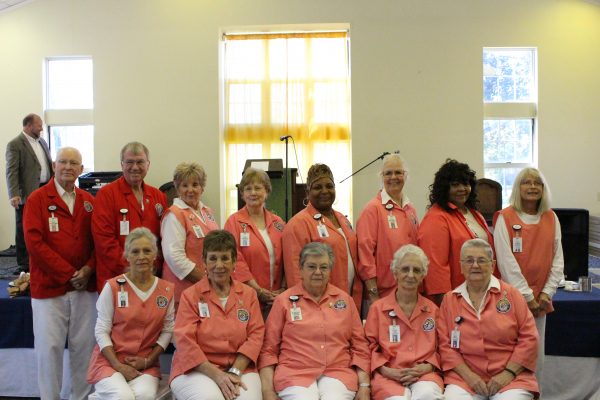 The hospital honored its volunteer workforce with a celebration full of food from Hickory Street Cafe, fellowship, and awards to those who have faithfully served those in the community for nothing more than the joy that comes with serving others and making a difference.

At the banquet, hospital staff honored the many people who have given up time to help the hospital and its patients in any way possible.

Money has also raised through the auxiliary program. In the last calendar year, $50,000 was donated to CVMC, and it was announced on Thursday that over $1.3 million has been donated since 1982.

The biggest story of the day was that of Montine Webb. Her volunteer hours are unmatched in the Auxiliary and Marketing Director for CVMC Vanessa Green said there is most likely no one else in the state of Alabama with more volunteer hours than Webb. She was honored and received a standing ovation for her whopping 34,000 volunteer hours.

The Coosa Valley Medical Center Auxiliary is a valuable part of the medical center. Auxilians have provided volunteer support, compassionate service, and served as a goodwill ambassador to the facility since 1982. The Auxiliary raises thousands of dollars annually that is used to provide equipment and services to patients and community as a whole. Annually, the Auxilians contributed approximately 14,000 hours of service each year.