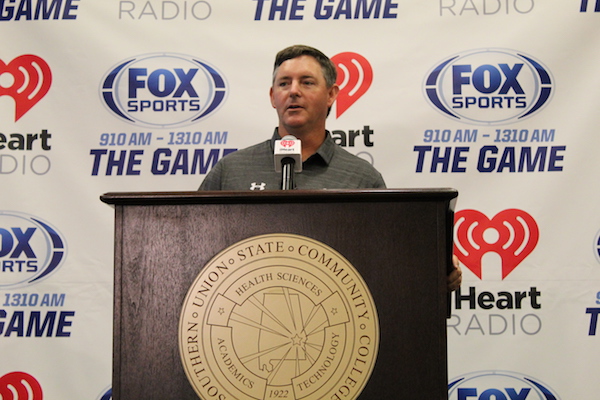 OPELIKA, Ala. – With the start of the high school football season nearly a month away, 18 teams assembled over two days at Southern Union State Community College for the 2019 High School Football Media Days. Five teams from the Auburn-Opelika area were at the event to preview their upcoming seasons.

Auburn head coach Adam Winegarden is entering his fifth season as the head coach of the Tigers. Last season, Auburn went 10-2, losing in the second round of the playoffs to Lee-Montgomery 12-6. Winegarden will have to replace talent across the field, including quarterback Griffin Speaks.

“If you look at most teams throughout the state that have consistent success, they are going to replace five to six a year,” Winegarden said. “That’s kind of where we are right now.”

Additionally, he mentioned Patrick McGlon and Matthew Caldwell are competing for the starting quarterback position.

Winegarden highlighted the difficulty of the region, which features 7A State Champions Central Phenix City. The Tigers have finished second in the region in three of the four years of Winegarden’s tenure. Auburn is 20-4 across the past two seasons.

“The league itself is the SEC of Alabama,” Winegarden said. “I think it’s one of the top leagues in the southeast. There is not a week that you are going to look at your schedule and think there is just a W sitting there.”

Winegarden previewed the team’s mission statement created by the seniors on the roster.

“The 2019 Auburn Tigers is a relentless brotherhood that’s committed to a pursuit of excellence, that will play fast, disciplined, with a dominating effort,” Winegarden said.

On expectations for the upcoming season, Winegarden said he expected the best out of his team.

“We expect the out of our team the same we have every year,” Winegarden said. “That’s just to be their best. I don’t expect anymore or any less out of them. If our best is win the region, then it will be to win the region. If our best is not, then it won’t be. I truly believe our mission is for our players to be better prepared because of playing ball.”

Auburn will open the season against Wilcox Central on August 23, who the Tigers defeated 42-0 last year.

Opelika head coach Erik Speakman is entering his second season as the head coach of the Bulldogs. He started last season 1-4, but his team ended the year 6-1, advancing to the third round of the playoffs where Opelika lost to Saraland 24-19.

“I think it just motivates your kids for the next year of coming back and trying to take that one step further for the next season,” Speakman said about the loss to Saraland.

Speakman will have to replace quarterback Cade Blackmon. Senior Brody Davis will step in to fill the role.

“Brody has done a great job of following Cade,” Speakman said. “Looking at what Cade does. Jake before that. Even probably growing up watching Matthew Christian a few years ago.” 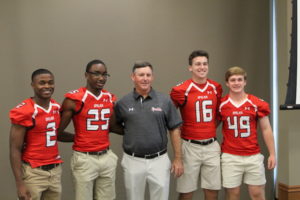 “He’s been in the offense since he was in basically eighth grade,” Speakman said. “Terminology wise he knows it all. Now, it’s just going to be distributing the ball to all the playmakers that we have on the offense.”

Davis said the transition has been smooth to starter. When asked about the difference between him and Blackmon, Davis said size and arm strength. He added that he felt like he had big shoes to fill when looking at the quarterbacks that have came before him.

Speakman said his team’s slogan for 2019 is “LTM,” which stands for “Little Things Matter.”

Opelika will begin the 2019 season with a game against Callaway High School from Georgia. The Bulldogs lost to Callaway 35-21 a year ago.

Beauregard head coach Rob Carter is entering his sixth season as head coach at Beauregard, but he also pointed out this will be his 14th season with the program as a coach. The Hornets went 5-5 last season with a loss to Pleasant Grove in the first round of the playoffs.

“My father was a great man,” Carter said. “Taught us to be in a community, stay there, build it. Find somewhere you love, and I do. I want to continue to be there for a length of time. Will never make it as long a Mr. Brown did, but I’d like to stay at Beauregard as long as I can.” 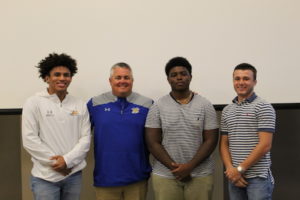 Beauregard will start its year against Benjamin Russell. It will be the first time the Hornets have played since the March tornadoes that impacted the community.

“I know that these young men worked hand-in-hand daily from Providence Baptist Church to out in the field,” Carter said. “It gives them a different aspect in life. The understanding that anything can happen at any time. Even when it does happen, if you bond together, you can build back. That’s what we are doing. We are using it as going into the season as to remember those people that suffered the greatest consequences and the families watching that devastation. The main thing watching the community come together and build back was amazing.”

The Hornets started 2018 with an 0-3 record, but rebounded to win five of their last six regular season games to make the playoffs.

“We play a tough schedule to begin with,” Carter said. “Our schedule is tough. There is no doubt. When you win a state championship a lot of teams don’t want to play you anymore, so you are left a tough schedule, which is really good. I think that it prepares for the end of the season, having to play those teams, being in those fights for four quarters.” 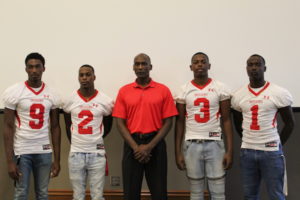 “The best thing about our program is that we have improved every year,” Cole said. “When I first got there, we won three games. This year, we won four. There is a positive movement in the program this year. Our ultimate goal this year is to go to the playoffs.”

Cole believes Loachapoka is headed on the right track.

“If you seen the same guys that I brought up here last year, they were a little bit smaller,” Cole said. “This year, guys have put their work in the weight room. They look much bigger and much more athletic looking right now. I think we are on the right track. We just have to keep on going.”

Cole emphasized the importance of winning early in the season to set his team up for success later in the year.

Loachapoka will open the season against Beulah on August 23. 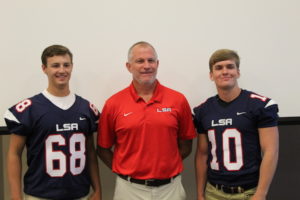 Following a winless season in 2018, Lee-Scott welcomes its new head coach in Robert Johnson. He is entering his 24th season as a head coach, winning a state title in 2011 with Tuscaloosa Academy. He will replace long-time head coach Robert Maddox.

“Lee-Scott has a great reputation,” Johnson said. “I’ve always really been pleased in seeing their kids play. They always play hard. They always usually have good athletes. Last year was a little bit of a down year. Very uncharacteristic, but sometimes things like that happens at small schools.”

In his opening statement, Johnson emphasized the amount of contributors Lee-Scott has in the program.

“I do think an advantage we are going to have in our league is going to be the numbers,” Johnson said. “We’ve probably got 25 to 30 kids that can contribute to any team in our league. When you have that many guys playing, hopefully we can be able to be fresh throughout the whole game. Keep our kids safer. Keep our kids motivated, and we will keep our excitement going in the program.”

Johnson is energizing the program, mentioning the growing excitement from the players and school.

“We had some great guys, like these two guys were huge in getting other kids trying to get excited,” Johnson said. “To begin with, we had a few. Then, we had some more decide they wanted to play, and then some more. Then even after spring training, we had some decide to come. We currently have some kids that are interested in coming to school here now from other schools. I think the excitement has built.”

Lee-Scott will open the season against Chambers Academy on August 23. The Warriors have four road games to start the season.