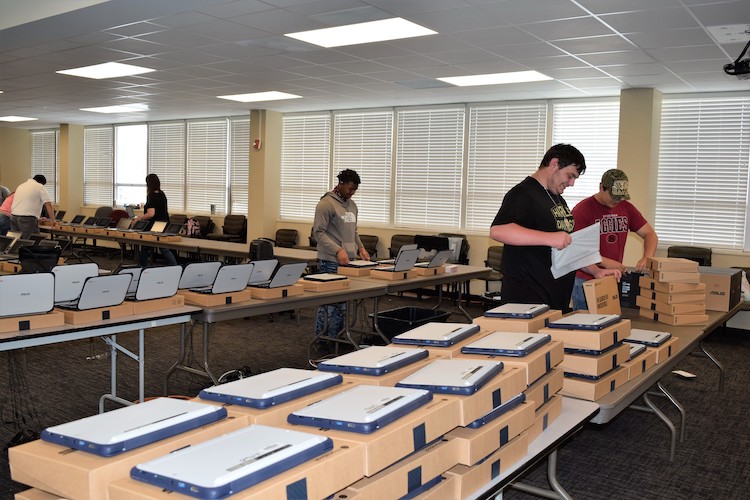 SYLACAUGA, Ala. – While the 2016-2017 school year is winding down, Sylacauga City Schools’ Digital by Design initiative is just getting started. Like SylacaugaNews.com previously reported, starting next fall, all Sylacauga City Schools students in grades 3-12 will receive a Google Chromebook. Students in grades K-2 will have access to Chromebooks as well as iPad devices while at school.

The exact roll-out time-frame in the fall will vary based on school. Pinecrest Elementary students (grades 3-5) will only use the Chromebooks at school. Students in Grades 6-12 at Nichols-Lawson Middle School and Sylacauga High School will be allowed to take devices home. Since middle and high school students will take devices home, each school will likely host parent meetings prior to device distribution next fall.

Gearing up for Digital by Design was no easy task. Sylacauga City Schools Technology Director Michael Robinson told SylacaugaNews.com the project has been a massive undertaking. Almost every network switch at Indian Valley Elementary, Pinecrest Elementary, and Nichols-Lawson Middle School has been or will be replaced. Wireless access points at all four schools have been or will be updated. The technology upgrades began in late October and are complete at Nichols-Lawson and Sylacauga High School. Pinecrest is currently receiving updates and Indian Valley will later this summer.

Chromebook devices have been inventoried and delivered to Pinecrest Elementary and Sylacauga High School for the 2017-18 school year. Nichols-Lawson Middle School Chromebooks will be inventoried next week.

Robinson says the goal of adding Chromebooks is not to replace teaching and learning; it is an additional component to add to the Sylacauga City Schools learning environment.

“There are already a lot of phenomenal things occurring in the school district. Digital by Design is just another one of those things. Instead of scheduling time in the computer lab or booking a cart of devices, the Chromebooks are there, ready for usage,” added Robinson.

Robinson also added that he is glad to see the project coming to fruition, but he was especially happy to see that the project was done well. The idea of the one-to-one ratio has been in place for nearly two years, but to properly implement the project, time was allotted for technology infrastructure updates and SCS staff professional development.

What’s next after students receive devices?

Sylacauga City Schools is even looking at equipping select buses for student use, especially for athletic trips and other extracurricular school trips where students may need Internet access for school work.