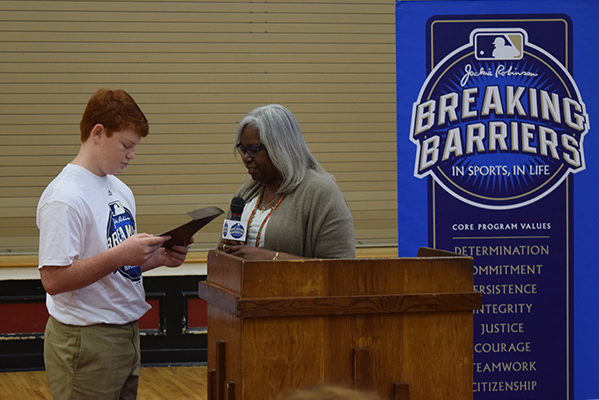 SYLACAUGA, Ala. – On the morning of April 24, Sharon Robinson, the daughter of famous baseball player Jackie Robinson, visited Nichols-Lawson Middle School. Robinson was present to honor Tank Wright, the winner of the national Scholastic Breaking Barriers Essay Contest on which SylacaugaNews.com previously reported.

Nichols-Lawson Middle School Principal Gary Rivers opened the assembly, honoring Tank Wright and thanking all seventh grade English teachers. Robinson then spoke to seventh grade students on the importance of essay writing, citing the value of self-expression that it brings to writers. Robinson then presented a staggering statistic: out of more than 11,000 students who submitted essays, Tank Wright was one of ten national winners, but furthermore, he was one of the two grand prize winners. The grand prize includes a three-day, two-night trip to a World Series game in addition to a laptop for himself and his teacher.

Following the grand prize presentation, Robinson took questions from students and then went to Tank’s English class to sign copies of her book Promises to Keep.

The essay itself required students to write about overcoming a challenge and how the students used the same values of Jackie Robinson to overcome the barrier. Tank’s essay revolved around the loss of his father and focused on courage and determination. Robinson told SylacaugaNews.com she was very moved by Tank’s essay.

“What was unusual about it to me was this it was a boy sharing his emotions because boys often avoid that. He was so expressive, and I thought that was a good sign that he would heal from this obstacle,” said Robinson. “It was sad, yet powerful, emotional, and very loving.”

“It’s been a wonderful day; the children have been very well behaved. I was excited to see such a diverse group of children. I liked the ones I met today, and I asked all of them what they like to do. It was great meeting all of them,” added Robinson.

“I knew when I read his essay that it was winning material. I told everyone at the school that I thought he had a great chance at winning, but now that he actually has won is just an absolute honor,” said Tank’s teacher, Emily McLain. McLain also added that having one of her own students win a national essay contest is very exciting for Tank himself, the school, the school system, and the city as a whole.

Principal Gary Rivers echoed McLain, saying that it was an honor to have a Nichols-Lawson student win an essay contest with more than 11,000 entries. “This win could not have come to a better young man. Tank Wright is very special, not only to the school, but me. I have been able to serve as his principal at both Pinecrest and now Nichols-Lawson, so I have had the opportunity to see his growth throughout the years.”

Tank’s mother, Sharon Wright, added that this experience has been thrilling. “Things like this just don’t happen to every student. It was a big a surprise to everybody. We didn’t expect him to come home from school one day saying ‘Hey, I won a national essay writing contest."” Wright says she is also looking forward to the once-in-a-lifetime experience of attending the World Series.