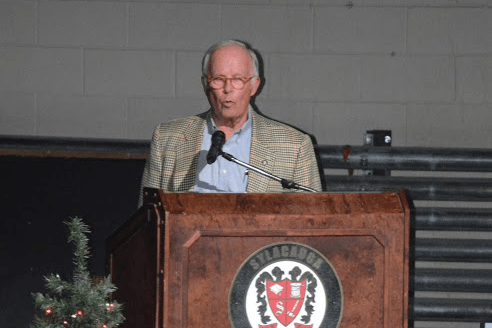 SYLACAUGA, Ala. – Last week, businessman Mike T. Deason visited Sylacauga High School. However, his visit to campus was not a normal one.

Deason is a 1961 graduate of Sylacauga High School and never completed any level of higher education. Today, Deason is the owner of M. T. Deason Company located just outside of Birmingham.

M. T. Deason Company was founded in 1982 and specializes in utilities and services like electrofusion and steel control fitting in addition to custom meter and regulator stations. These utilities are used for water, natural gas, and wastewater industries and are sold nationwide.

Deason’s speech was centered around his personal story and opportunities in life for individuals without a college education. Deason’s personal story entails being enrolled at Auburn University but then dropping out soon after classes began. To this day, Deason credits his business success to a conversation he had with his father after dropping out. Deason’s father did not allow him to return home after dropping out of college. Instead, Deason went out and found work.