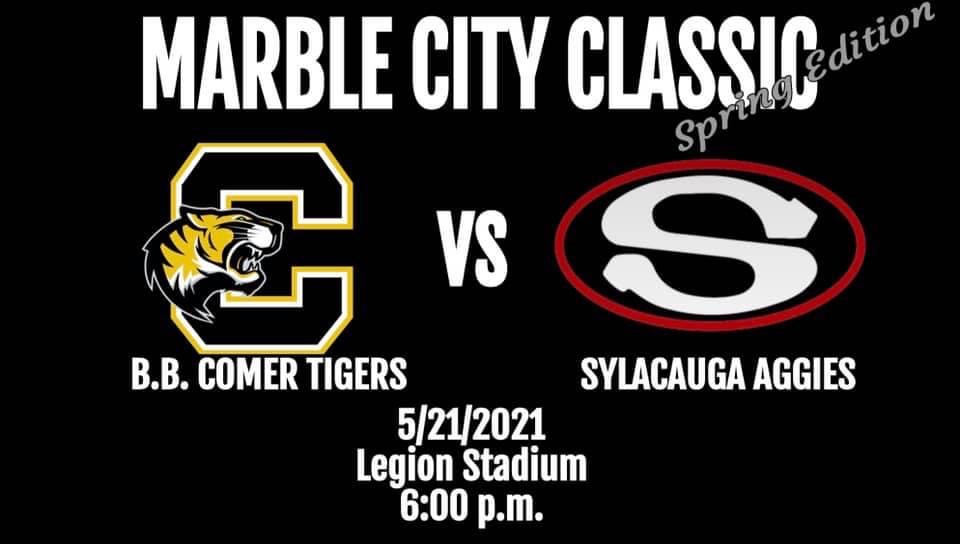 SYLACAUGA, Ala. – The B.B. Comer Tigers and Sylacauga Aggies lace up on May 21 for the first match since 2016.

The Sylacauga v. B.B. Comer rivalry is one like no other. This game is more than just two football teams taking the field, but lifelong friends battling it out on the gridiron. It is a game that brings together a community and divides it simultaneously. This game has created local legends, amazing memories for all involved, trees covered in toilet paper, and bragging rights for 365 days.

The Aggies and Tigers had played each other 87 years in a row, until the Aggies went up in classification. Few may know that in the early days of this rivalry the two schools were not just cross-town rivals, but area foes. This rivalry was more than bragging rights, it was the road to a state championship. The legacy and the competition between these past rivals has always been there, even though they haven’t played each other in almost six years.

This game will be one to remember considering the two schools share a field.

“It was always the biggest game no matter what the records were,” said former B.B. Comer football player and current SHS coach Anthony Jacks. “The game always had some electricity about it. It didn’t matter if we (Comer) were having a bad season and if we were having a good season, it just made the game more exciting. We (Comer) knew that this one game could make or break our season. ”

For this game, the pressure has never been more intense. Since B.B. Comer and Sylacauga have not played in almost 6 years, both teams are trying to prepare for this big game.

“You don’t want to lose if you are the larger school and you have the streak going,” said SHS Coach Jeff Steers. “Even in the scrimmage, there is pressure because Sylacauga is expected to win so now there is pride on the line.”

“This upcoming game is just another day to get better for us as a program,” said B.B. Comer Coach Michael Hale. “I don’t think it’s going to be like the true “Marble City Classic” but it’s going to be an exciting moment for the city of Sylacauga and the people who knew what that week 10 classic felt like. Ultimately, I want our young men to go out and produce a great brand of football, so our city knows that our Comer kids deserve the same recognition and support as the Sylacauga High School community.”

For the B.B. Comer Tigers, this is a big upcoming, especially since B.B. Comer always has the underdogs status. Many refer to Comer as the school across the tracks, but Comer hopes to regain a name.

“We have nothing to lose, it’s only a spring game and not a regular season game,” said B.B. Comer head coach Adam Fossett. “This is a huge opportunity for both of our kids. There is more pressure on them especially since they are the 5A school and we are only a 2A.”

No one knows what the outcome will be, but the one thing that we do know is that this rivalry is great for the city of Sylacauga and will create lifelong memories for childhood friends.

This story contributed by RadioAlabama Student Ambassadors Sydney Harris and Ever Harris.