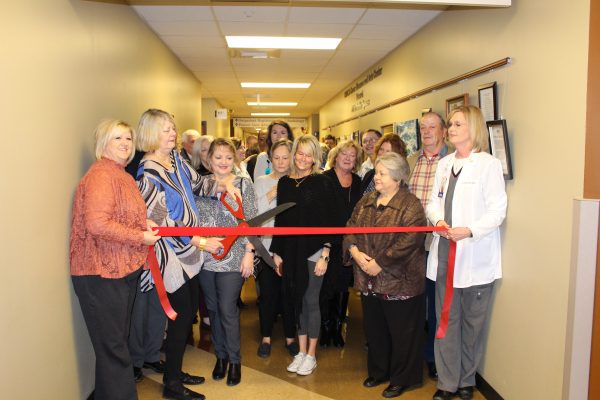 JoAnna Banks, John Newberry's daughter, cuts the ribbon as the CVMC Walking Trail was officially dedicated to her father.

SYLACAUGA, Ala. – Coosa Valley Medical Center held a ribbon cutting ceremony on Thursday dedicating its walking track after a man who gave the community a healthier vision through his daily walks at the hospital.

With many in attendance, including family, Sylacauga Mayor Jim Heigl, and other city officials, CVMC officially renamed its walking trail the “John Newberry Walking Trail”.

Newberry was a popular man in the city of Sylacauga, serving as the city clerk for 20 years and being a regular at CVMC where he walked his way daily into a healthier lifestyle. Before the ribbon cutting, Director of Employee Wellness Carla Taylor spoke on the legacy the Newberry left in his community and the hospital. Taylor said Newberry walked the hospital before there was ever a thought of a walking trail. She explained he walked upstairs, downstairs and all around, usually amounting to three miles.

Taylor said Newberry’s passion for walking began after having open heart surgery in the 1970s. After he went through that he started walking at First Baptist Church and then moved to CVMC, according to Taylor. “For 20 years he arrived here everyday around 10:00, walked the halls and stairwells and CVMC, and when he finished his walk he was right at three miles,” she explained. “He did that until he was not able to because of health reasons.”

For his daughter in attendance, JoAnna Banks, the day was emotional. With tears in her eyes she said, “This walking trail represents my fathers life and legacy, because walking was so important to him. This is a perfect remembrance of my father. He loved people, so as he walked he spoke to everyone he saw. The hospital was like his second home and a tremendous part of his life.”

The Coosa Valley Medical Center Walking Trail begins inside of the hospital just by the entrance of CVMC’s restaurant, Hickory Street Cafe, all the way to the nursing home, and back to the cafe. Contained completely to the bottom floor of CVMC, three laps on the track will equal one full mile of walking.