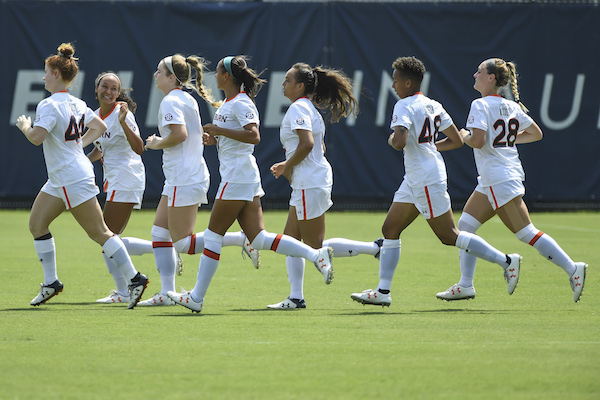 AUBURN, Ala. – For the first time in 20 years, Auburn soccer will play its first four regular season games away from the Auburn Soccer Complex.

Auburn head coach Karen Hoppa said her team is welcoming the challenge as they enter the 2019 season.

“I don’t think it is more or less difficult than what we usually have,” Hoppa said. “It’s a loaded schedule, and we always try and play that. Our goal is to not just get into the NCAAs but be successful at that level, and you can’t do that without playing teams that have played at that level.”

The road trip opens with two games in Florida against South Florida and Florida Gulf Coast. The Tigers will then travel to play in a neutral-site tournament in Athens, Ga. for games against Maryland and Virginia Tech. Last year, South Florida advanced to the second round of the NCAA tournament and Virginia Tech made it to the round of 16. Auburn lost 2-0 to Minnesota in the first round.

“I think it motivated them,” Hoppa said about the loss. “You never want to lose at home ever, especially not in the NCAA tournament. Especially when we owned that first 20-25 minutes and should have been up in the game. I think they have used that as motivation in the offseason.”

With 79 percent of her goal production returning, Hoppa believes the strength for Auburn this season will be their offense. In 2018, the Tigers ranked third in the SEC in goals scored per game at 2.10.

Auburn returns its leading goalscorer (nine goals) in senior Bri Folds and its leader in assists (eight assists) in junior Alyssa Malonson. Both players were called up to the U.S. Under-23 Women’s National Team to play in the 2019 Women’s International U-23 La Manga Tournament in Spain. Auburn was the only college program to have multiple players on the roster.

“It’s certainly great,” Hoppa said. “Credit to our program and our ability to develop players and what we’ve done there. Credit to those two kids we have and their quality. It certainly helps, and frankly, just going on that trip made those two better players. They brought that back to Auburn. They brought a little more experience, a little more soccer maturity. It makes us better on the field as well.”

Auburn focused its attention on improving its defense in the spring. With defensive midfielder Gianna Montini, defender Taylor Troutman and goalkeeper Sarah Le Beau having graduated, Hoppa said some players will have to make jumps defensively to fill the void left by those players.

Auburn will look to Wisconsin transfer Audrey Poorman to provide depth for the defense. After playing in five of the Badgers’ spring games, she redshirted for the 2018 season.

“It was one of those where she stepped on campus, and it was a great fit,” Hoppa said. “She is going to bring some experience and depth in the back. The other thing is she is super fit. Really strong in the fitness department, so she will make us better in that regard as well.”

“I think the portal has encouraged athletes to transfer, which I personally don’t think is a good thing,” Hoppa said. “Certainly, there is a time and place and reason to transfer, but I think it has made it easier, and I think a lot of times that will be their solution instead of staying through a hard situation, working through it and trying to get better.”

“The positive is every school is able to see every player that is transferring. In the past, half the time somebody would get a transfer and I would go ‘I didn’t know she was transferring. I would have wanted to recruit her.’ So, positives and negatives, but I think it is a work in progress, and hopefully, it will get a little bit better each year.”

Aside from the coaching staff’s successes in nabbing transfers, they landed a diverse group of recruits spanning six different states, including players from Colorado, Kansas, New York and Texas. Seven players were a part of Auburn’s recruiting class, comprising of a goalkeeper, two defenders, two midfielders and two forwards.

“I’m guessing 60 percent of our roster is from the southeast, but the other 40 percent, we can go anywhere,” Hoppa said. “It’s great because we really can go anywhere. A lot of it is credit to the branding of Auburn Athletics over the last eight or ten years. People know Auburn.”

Hoppa called it a ‘special group,’ saying they will contribute right away. Two players will miss their entire first season on campus with Kylie Bechard and Marissa Arias both suffering late high-school season injuries in April.

When talking about the goal for the team in 2019, Hoppa said it is to be better than they were last season.

“That’s always the goal, right?” Hoppa said. “We felt there was unfinished business last year. We want to be better.”

Auburn will play an exhibition game at Kennesaw State on August 13 at 6 p.m.